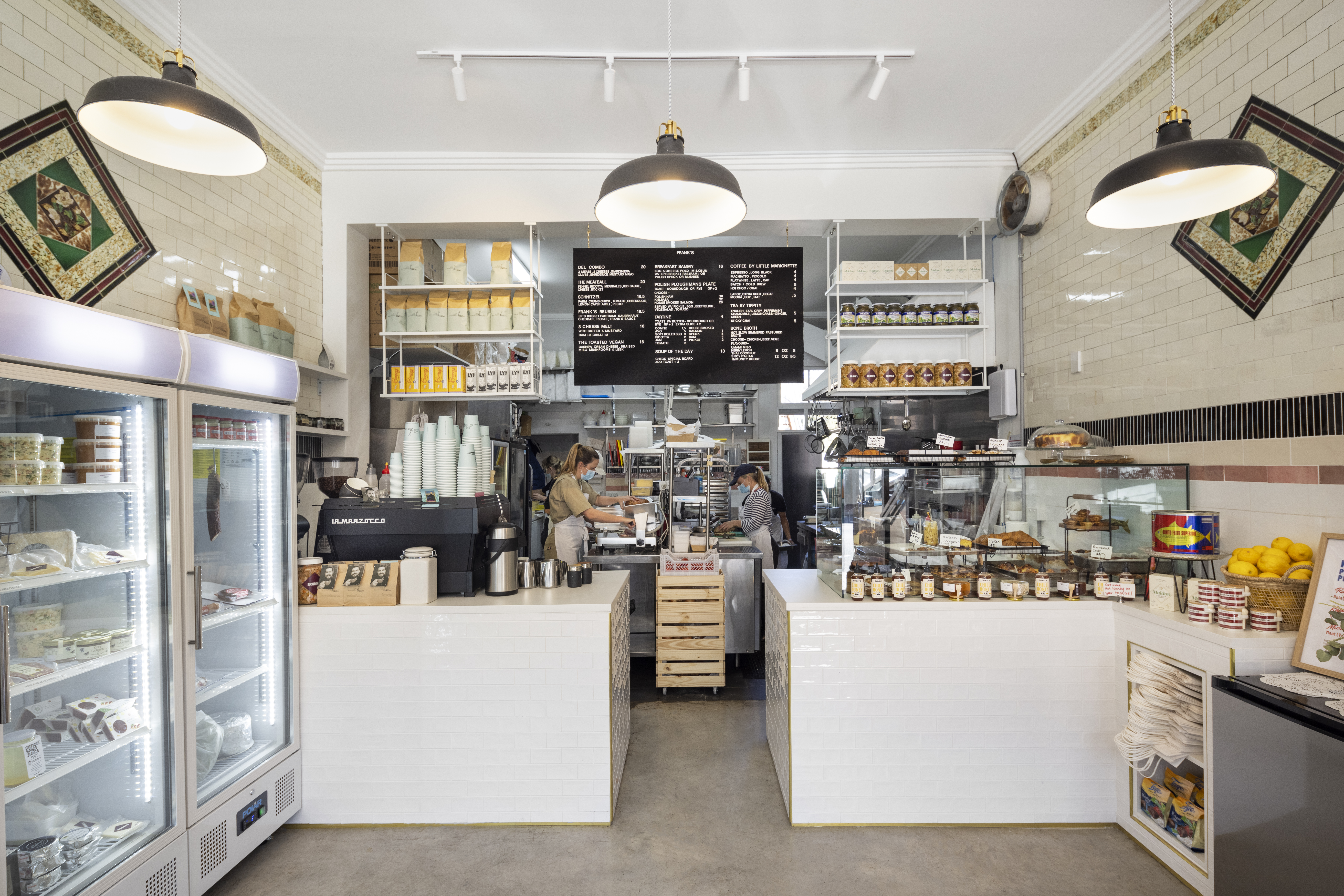 Delicatessens or delicatessens have undergone a major evolution. The concept originated in Germany over 300 years ago as retail-only spaces that sold pre-prepared foods, cold cuts, cheeses and specialty items. Delis then spread to the United States and was specifically popularized by European immigrants in New York.

From there, the centers progressed to include take-out and dine-in options as well as broader offerings including sandwiches, soups, salads, baked goods and beverages. There are many interpretations of delis, but the common thread is comfort food done right.

Delicatessens are certainly having a moment in the Australian hospitality scene, with chefs and small business owners creating their own modernized iterations.

Hospitality talks to Sammy Jakubiak of Frank’s Deli and Dom Wilton of Hector’s Deli about starting a store and why the deli is here to stay.

In every neighborhood of New York, there is bound to be a delicatessen. In most cases, these are family businesses that are community spaces where people gather to eat or buy food to take away. Sammy Jakubiak got a taste of the best the city has to offer on a trip with his brother Alek and partner Ben Kelly.

This prompted the trio to open Frank’s Deli (named after Kelly’s grandfather) in Sydney’s Waverly when they returned home. “We spent so much time eating at all the delis, so the inspiration came straight from that,” says Jakubiak.

Jakubiak saw parallels between Deli’s dishes and the food she ate growing up, which is now on display at Frank’s. “The food we enjoyed on our travels had similarities to [food from] my Polish origins,” she says. “We thought we’d be doing what we know and love, and we were excited about the menu because it’s things we all love to eat or are part of our family traditions.”

For Melbourne-based chef Dom Wilton, the opening of Hector’s Deli happened by chance. After stints in fine dining, he intended to run a French restaurant with his wife Vanessa Bossio and cousin Edward Ring, but a delay in permits led to a change of plans.

“We found a site in Richmond on Buckingham Street and it was a little corner store,” says Wilton. “We wanted to make something easy, approachable and recognizable where there was no spinning or twisting.”

Wilton drew on his own personal experiences to come up with the idea for Hector’s. “I remember sitting around a table and saying to myself: ‘Growing up, a deli was like a convenience store that sold sandwiches,’ says the chef. “I knew I wanted to have deli in the name and I was sitting there with my cousin and I said, ‘What was your dog’s name?’ and he said ‘Hector’, and I said ‘Perfect’.

What was supposed to be a temporary gig turned into something that would have mass appeal. “From day one, we just had huge queues at the door,” says Wilton. “By the time we had been doing it for a year, we still hadn’t received approval from the French restaurant, so we decided to focus on Hector’s because it was so popular.”

Sandwiches are one of the main attractions of a delicatessen and are the ideal containers for deli meats, pickles and condiments. There are all kinds of sandwiches on the menu at Frank’s Deli, but a classic Reuben was non-negotiable for Jakubiak.

“The only thing I wanted on the menu was a Reuben,” she says. “It’s the quintessential sandwich and it’s what everyone should want to eat if they want a sandwich.”

Reuben from Jakubiak uses Wagyu brisket pastrami from LP’s Quality Meats, homemade sauerkraut and pickles layered between two pieces of caraway rye from Brickfields Bakery. The point of difference is Frank’s sauce, which has over 20 ingredients.

“It’s a version of a Russian band-aid,” says Jakubiak. “I started in the restaurant business and burger pop-ups, so it’s something I’ve developed over the years for burgers that I thought would go really well on the Reuben.”

The sauce also makes an appearance on Breakfast Sammy which sees folded scrambled eggs combined with American cheddar cheese. Customers have the choice of adding brisket pastrami, Polish speck, or braised miso mushrooms. “We grew up eating what my dad called ‘the Jak-muffin’ of our last names,” says Jakubiak.

“We were going to put it on the menu, but our family was like, ‘We want something more exciting,’ so Sammy’s breakfast was born out of that. It was obviously a bit of a namesake, but it’s the family breakfast sandwich and our second best seller.

Sandwiches have always been the name of the game for Wilton. “When we opened Hector’s Deli, we only made five sandwiches because we had 27 square meters of space, but we also wanted to put our energy into something we thought would be super delicious,” the chef explains.

The most-ordered sandwich is also a pastrami-centric creation that has the option of including a homemade sauce. “It’s thinly sliced ​​smoked brisket with sweet mustard, pickles, bread, sauerkraut, Westmont dill pickles and toasted light rye,” says Wilton. “We have a signature sauce called the Hectic sauce which is a lightly spiced mayonnaise.”

Besides sandwiches, Frank’s and Hector’s both sell baked goods. “It’s good [for customers] to recover some of our homemade products,” says Jakubiak. “We make a daily blueberry cornbread with polenta and two different flavors of focaccia: one of them is potato, rosemary and candied garlic and we also offer a seasonal option.”

On a sweeter note, Frank’s Deli is known for a caramel treat called the Brunswick Bun. “It’s like a focaccia and a brioche drowned in caramel,” says Jakubiak. “It’s spiced with cinnamon and cardamom and it’s rich, yet light and chewy.”

Anneliese Brancatisano is the originator of the bakery selection at Hector’s and has worked with Wilton to reinvent familiar favourites. “The brief was to look to Baker’s Delight, Brumby’s Bakery and those types of places and elevate their offerings,” says Wilton.

“We work on bacon and tomato slices, apple fritters, cinnamon rolls and butter pies. A lot of the inspiration came from Canada (my wife and COO is Canadian), so it’s also kind of Tim Hortons inspiration.

Delis were originally developed to offer a wide range of options from retail products to home-cooked meals. And Jakubiak does just that by creating ready-to-use products for customers. “We usually keep our shelves well stocked with pâtés, terrines and cheeses,” she says. “We also do a Polish salad which you can buy from the pot and we do weekly pasta and lasagna.”

A retail section also offers pantry items like Condimental, Lulu’s Remedy, Hotluck Club, and Moon Mart. “A lot of [chefs] were out of work during COVID-19, and they took the time to launch their own brands and products,” says Jakubiak. “We really wanted to support people doing cool things and having their products on our shelves is really important. Our customers love it. »

Wilton has always gone for a simplified menu, but the venue has raised the bar when it comes to drink options. “The coffee program is growing and we’re offering fermented pineapple drinks and specialty smoothie-like drinks,” he says.

The team is busy with the progress of Hector’s Deli and keeps everything in-house. “We roast our own coffee and offer bread recipes that are custom-baked,” says Wilton. “We are starting to develop [more] baked goods and us slicing our way through salads.

Delicatessens have always symbolized locality and community, two essential things in today’s climate. “Because of COVID, everyone has become a lot more suburban and I think people really appreciate a local place,” says Jakubiak. “No matter what type of deli, there’s an element of ‘Someone here really cares about what they’re doing’.”

Businesses today are rewriting new chapters while carrying on traditions. “A lot of us went to delis with our parents when we were young, they were family businesses and our parents had their rituals of buying things they liked,” says Jakubiak.

“A new wave of people in the industry are opening these little delis with their version of the products they love to sell and the sandwiches they love to make. It’s hitting the next generation and creating new habits for the young people of a accessible way.

Wilton echoes the same sentiment and has changed the public’s perception of what a deli is through Hector’s. “We’ve been open for about five years, and we knew the word deli had almost no meaning other than what it meant to me growing up,” he says.

“At the time, the answer was immediately confusing; people expected us to serve deli meats and they didn’t know how to interact with the idea that a deli was a sandwich shop. But it allowed us to build the idea organically and for the immediate community to decide who we are.

Although there are many definitions of a delicatessen, the notion of inclusiveness is generally shared. “The theme of what we’re doing here is familiarity and accessibility,” says Wilton. “We’re not trying to do anything too fancy; we’re just trying to elevate the classics.