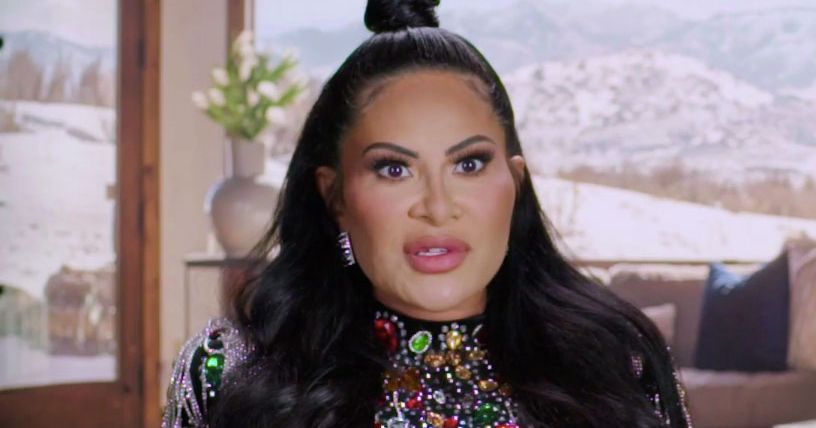 Was this episode supposed to exist? I recognize that I am playing a dangerous game here because probably not Bravo programming episode Needs to exist. There’s something crazy, though, about settling in for the grand finale of one of the most outrageous Housewives recorded seasons (at least on a plot level), and that’s just… that. Do not mistake yourself ! I secretly love filler episodes because they mean less transcribing 45 minutes of screaming and more pontificating about the kind of snacks Heather keeps in her Prada Monolith boots (my money is on Chomps Jalapeño Beef Sticks up and Sour Patch Watermelon at the bottom). But the juicy morsels here were all in the preview? We could have just watched Lisa Barlow-Durst lose her religion in Zion, take a few weeks off to recuperate, and go straight to the 47-part reunion.

On the bright side, at least the clipsicles are back! Lisa runs to her event space to pretend that guys tapping washi tape on a wall are the second coming of Christ. Mary heads to the local putt-putt course with Robert Jr. to play those tithes ($100 per hole!). I want nothing more than this kid to find peace or, at the very least, a supportive group of friends and a living situation that doesn’t involve Mary’s haunted doll lamps.

Ding Dong! It’s Shah Chalet movers walking around to give a quote for a reduction from 9,000 to 4,500 square feet and, wait a minute! Why does Jen know them so well? At first I just thought they were buddies, but there were several mentions of “like we’ve done in the past”. How many times has Jen moved around the greater SLC area? Also, since this is just filler content, I’ll take a second to discuss Murilo offering drinks for everyone. He clearly asks them what they want or already know because they are all different and not like “I just typed in a ton of options, so everyone will find something”. You already know that this man would NEVER give Jen a drink she doesn’t like for fear of, uh, retaliation. All of which logically leads us to a haunting hypothesis: Jen de LaCroix’s favorite flavor is COCONUT. Someone’s calling the Feds (maybe Meredith has their number handy?)! I don’t mean it’s irrefutable proof, but if you drink bad guy juice, maybe you’re a bad guy?

At the cemetery, Heather is hosting a small celebration of life for her father John as she was unable to have a proper funeral during a COVID surge. His sisters, his brother and his mother do not show up. Even the sister she somehow reconciled with in Vail is a no-show because she’s “loyal to the family taking a stand, refusing to participate.” I need to know if “participating” means “being on a Bravo TV show” or “interacting with a non-Mormon.” Heather says they may have had a separate memorial without telling her, which is both overwhelming and “hmmm, a lot to think about” given all the fucking memorial talk. Those who signed their Bravo release forms lay down in the grass and consecrated their newly formed Mormon-defector alliance by eating waffles out of polystyrene containers. Bone apple teeth!

Speaking of unsustainable take-out boats, Meredith heads to a frozen pond with about thirteen thousand bottles of brand name water so the whole family can don silky jams and snap shots for her jewelry line. Oh, GLAAD is also involved somehow. Apparently, “people always ask when the men’s collection comes out, and the answer is my men’s collection never comes out – my jewelry is for everyone.” I refuse to believe that any human man has ever asked this. Plus, Things Remembered is still running at many local malls. This particular market is surely sated. Anyway, Brooks is making an incest joke, so I’m choosing to disengage from that scene.

At the Rose House, Whitney dons a red lace teddy she bought at an props auction for the 2007 hit, A stroke of love with Tila Tequila. Justin comes home from a trip, she pours Dom between her big tits and they get to work. By business, I mean “sponcon for LoveIsArt®”. This 401k is not going to rebuild!

Alas, it’s time for all the girls to get ready for the last VIDA® event of the season. Lisa asks Jack which neon blazer she should wear as she has burned all her friendships and now has to take fashion advice from someone wearing a Kappa shirt. Murilo is brushing Jen’s wigs, and all I can think about is what she’s going to wear to her trial (which starts in March! Mark those calendars). Fingers crossed that “Gaga-as-Gucci x Alexis Neiers” is the overall vibe.

The theme of the VIDA® event is “’80s/’90s DECADENCE for the release of their crystal embellished bottles”. It just means the place looks like if you took Ashley Darby’s cougar party (the one where Katie Rost nearly boned her man at the table) and then subjected her to a Saved by the bell-branded IG filter. The catering consists of Stouffer’s French bread pizzas made in the toaster oven. The dress code is “Amelia Earhart-meets-Miss Cleo,” or at least that’s how Jen interprets it. Decadence at all levels!

Meredith shows up late with Seth, in a Reagan/Bush shirt, which made me wonder if it’s harder to own a 1984 OG Reagan/Bush shirt or buy a replica from Walmart just for this occasion. Lisa says to Meredith, “LOOK HOW CUTE WE ARE. WE ARE BEAUTIFUL; YOU ARE TOO BEAUTIFUL, COME SIT DOWN. I AM HAPPY YOU ARE HERE – I LOVE YOU. Would average TikToker therapy lingo classify this as “love bombing?” Either way, nothing says “a true ten-year friendship” like a venomous tirade followed by a shower of the emptiest compliments!

Mary arrives. Coach Shah thanks her for inviting Jen to church because they were nice to her, to which she replies, “You know why? Because they follow the example – what I tell them to do because it comes from me. I have love. I’m not shaking in pain. I don’t dwell on people who are hurting, I forgive them and move on. Perfect timing because Whitney comes to apologize for calling her church a cult, and OH NO, GO. Jennie turns their conversation to Mary who doesn’t like her. Mary tells him to shut up and then says, “Okay, you’re kidding us, huh?” before also muttering to his henchman, Jesus (presumably), to “come and get that little ant.” Jennie calls Mary uneducated, yells more, then throws her a drink when she walks away. I have never been more “TEAM NO-ONE” than this racist/classist confrontation.

After the fight, Jen breaks down Jennie’s glass throwing technique and determines that hers is superior. Lisa tries to get everyone to go beyond “neutral” and have a friendship hug as a group. Meredith even reluctantly tells Jen that they’re friends before everyone completely loses the plot, and we end up rehashing Marks’ wedding rumors. Next thing I know, Meredith grabs Seth and storms off screaming, “I’ll tell you who everyone dated and nobody knows about!”

We’ve now seen that same clip no less than 12 times, and to no one’s surprise, Meredith keeps a low profile and doesn’t provide any additional context. For someone “more than happy” to share the darkness her private investigator unearthed, she’s not giving us anything, huh? Jen wants to crucify Meredith the same way everyone else crucifies Mary for running away, and I think everyone needs to lay the nails down and maybe not crucify anyone? Just a thought?

Alas, they roll up these silly little cards that a production assistant created in Google Slides for each of the girls. Before the curtain falls, Whitney kicks off her shoes, straddles Justin like it’s after prom, and the Bacardi 151 kicks and mutters, “I don’t even know why they’re fighting; it’s so stupid.

AMEN. And with that, the season is over. Thanks for sticking with me for the past 21 weeks, and see you on the other side.

Catch all the drama from your favorite shows!

By submitting your email, you agree to our Terms of Use and Privacy Notice and consent to receive email correspondence from us.