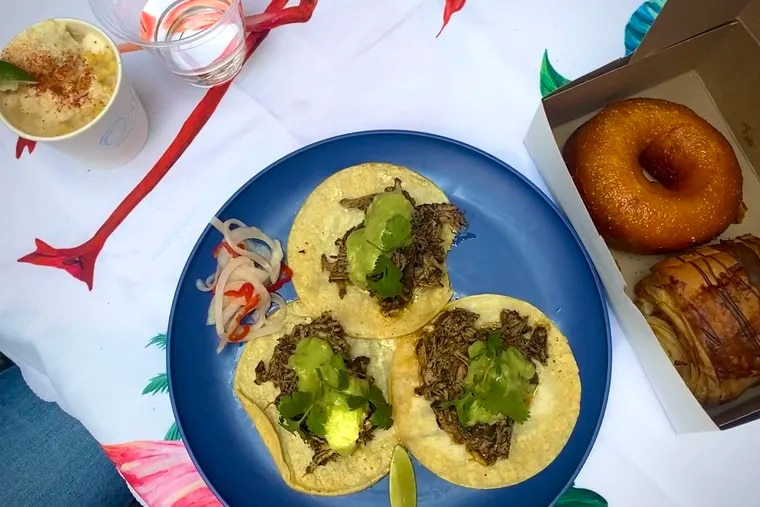 The pandemic has been good for collaboration, especially in Philadelphia food circles, where chefs have teamed up for special tasting menus that bring out lovers of novelty. It’s a trend that has seen chefs invited to tastes of To return to, river twiceand Stinaoften for one-night events.

One of the city’s newest collabs, however, has more staying power and features two staples of the American diet: tacos and donuts.

These are the main offers of Yes, a weekend-only project from Mexican food specialist Israel Nocelo and pastry chef CJ Cheyne, owner of Yes Bakery in Old Town. Walk down the narrow passageway next to Oui’s cobalt-colored storefront and you’ll find Si in a gravel courtyard adorned with a piñata and a disco ball. Head up to the back entrance of the bakery to order Nocelo’s spicy cochinita tacos and Cheyne’s Mexican donuts, sit down and open a Victoria lager.

Nocelo and Cheyne have been frequent collaborators since the pandemic. Nocelo first tapped into Cheyne’s culinary abilities in 2020 as general manager of La Llorona, to bake Mexican bread for the brunch menu. While he has since moved on to run General Tsao’s house in Rittenhouse, the pair have continued to work together through El Mezcal Cantina, where Nocelo perused the menu. Cheyne makes conchas for the new Point Breeze restaurant, which cooks them to order in a wood-fired oven and serves them with vanilla ice cream.

Nocelo argues that Mexican and French cuisine share a bond: during Mexico’s occupation by France in the 1860s, cooks used local ingredients like chocolate and chili peppers in approximations of classic French dishes, like crêpes .

“All those breads that cook in Mexico, like tortas and cemitas, come from baguettes and croissants,” he said.

Si was conceived as a creative outlet that satisfied two respective desires: Cheyne had envisioned a second location for Oui, and Nocelo – who has been involved in various projects in Philadelphia, including La Mula Terca, Tuna Bar and Attico Rooftop – wanted to set up worth Mexican street food.

The two were discussing these ideas when it came to Cheyne’s mind, “I have a garden. We use it, people love it. What if we made it a concept? she says. “You can start small, just to test the waters by doing a pop-up, and that’s exactly what we did.”

They briefly launched If last winter, serving tacos and donuts around a campfire in the backyard, and brought it back in April after a hiatus.

The full menu is available on site or to take away from Friday to Sunday from noon to 6 p.m. or when sold out. (Si’s donut selection is available throughout the week, and Nocelo said to look for intermittent specials like breakfast tacos soon.)

Besides the tacos, you can order the cochinita sandwich, served on a Oui baguette, as well as mayonnaise-smoothed esquites or spicy and tangy fresh fruit. Si’s pre-game pack includes the attributes (tortillas, salsa, habanero escabeche) for enough tacos to feed four people, plus an optional six-pack of beers. Pre-order via Instagram.

In the future, Nocelo plans to add traditionally cooked tacos al pastor to the vertical spit. Oui’s pastries are seasonal, and the current line of floral-inspired donuts includes agave-chamomile, hibiscus and lemon-poppy seed. Look for “rainbow fruit flavors” this summer.

On a recent mid-afternoon Sunday, Si was a quiet oasis away from the hustle and bustle of Third and Race, but Nocelo intends to cultivate a “brunch, lounge-y vibe” with music cumbia and more greenery as the weather improves.