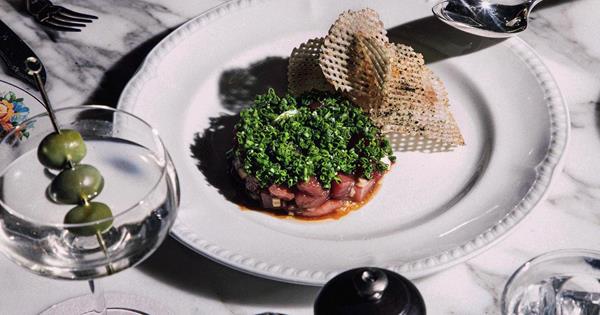 Soon in Melbourne: a bistro inspired by Paris by Scott Pickett

From menu to decor, Smith St Bistrot is inspired by the 1920s heyday of the City of Light.

Scott Pickett has been busy. Over the past 18 months, he has taken over the lease of Melbourne’s Thai icon Longrain, launched CBD restaurant Chancery Lane and oversees the food and beverage offering in the highly anticipated redesign of the Continental Hotel in Sorrento. , on the Mornington Peninsula. That’s on top of keeping long-time favorites Estelle and Matilda running throughout Melbourne’s various lockdowns and reopenings.

Today, he adds another pen to his list with Smith St Bistrot: a Parisian bistro from the 1920s taking over the former site of Saint Crispin in Collingwood.

The menu is a tribute to some of Pickett’s and chef Daniel Southern’s favorite French dishes. They will be classic, of course, but with a Pickett twist. Think smoked shank and pea soup with a delicate mint cream; lightly crumbled King George whiting served with crayfish and cucumber mayonnaise; and simple desserts like crème caramel and raspberry soufflé.

“French cuisine has always been a cuisine that I enjoy, not only to cook but also to eat in bistros around the world,” says Pickett. “It’s romantic cooking that can be very simple or laborious to master, but that’s the beauty of it.”

A $40 “menu du jour” will feature a rotating range of dishes each evening, and will include a glass of wine, of course. Guests could enjoy a Milla Farm duck with puy lentils one night or a wagyu cheeseburger the next. There is also a tuna tartare, a summer tartlet and a chicken fricassee with tarragon for two.

Most of the week, Smith St Bistrot will be open from 11am. There will be coffee to go, as well as an express lunch menu with options like quiche Lorraine or steak sandwich baguette.

Before Smith St Bistrot’s Valentine’s Day opening, GT got an exclusive look at the interiors. While Estelle and Chancery Lane, both inspired by bistros, are sleek and modern, Smith St Bistrot plays things a little more classic.

Theatrical is the first word that comes to mind when stepping into this alluring multi-level space, co-designed by Anthology Studio’s Pickett and Sarah Townson.

You are greeted by antique mirrors to the ceiling sitting above romantic red leather booths; marble tables punctuated by quaint, custom lamps; and there’s a display of living moss lining the restaurant’s exposed brick walls, which climbs a spiral staircase to an atrium-style second level.

Continue upstairs and you will find the private reception room. The walls, which have been hand-painted by Townson herself, are reminiscent of a Brothers Grimm tale, with forest greens and deep blues dominating the palette.

The attention to detail is impeccable. Each piece of dinnerware has been carefully handcrafted; from the intricate paper doilies to the eclectic mix of champagne glasses, almost everything has been repurposed. The finished effect is striking: Smith St Bistrot feels straight out of Paris during its crazy years year.

“We bought everything, I didn’t want anything new,” Townson says. “We spent four months converting all the antiques into modern tableware – it’s pretty crazy.” It’s been 10 years since Pickett acquired this site, and it’s had a few lives over the past decade. Smith St Bistrot has a good chance of becoming the best incarnation to date.