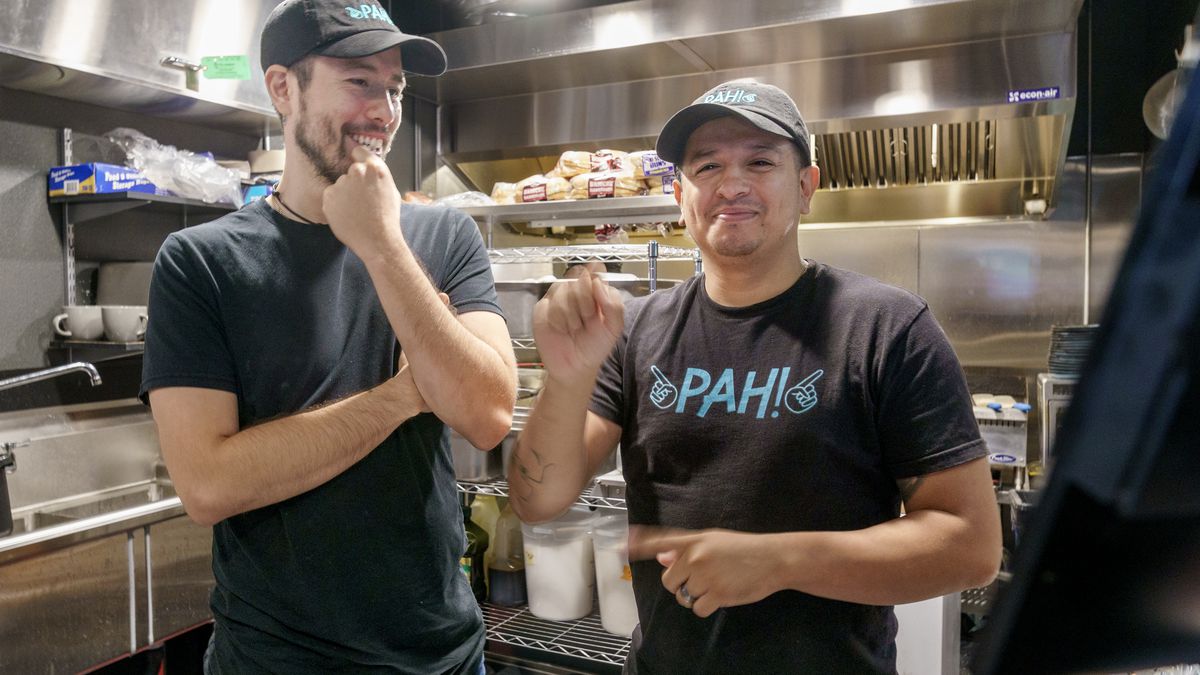 Every culture, language and generation has its own slang, whether it’s the hip dads of the 1950s or the legit NorCal surfers of the 90s. And deaf culture is no different.

For people who use American Sign Language (ASL), “pah” is a celebratory word that means “finally”, “success” or “finally”. It is slang that uses a mouth morpheme in addition to the signed word to underline or add context.

“You make this movement with your mouth signing the word ‘finally,'” Lillouie Barrios explained, “And of course this is a world that a lot of cisgender white people have been running for a long time and so finally — Paa! — we can have our turn.

This “world” is that of restaurants, where Barrios and her husband Victor Covarrubias have worked since they were teenagers. So for someone queer, Latinx and deaf, Paa! is the perfect name for a new restaurant.

Barrios said he experienced a lot of discrimination at work, something common in the deaf community: “So I thought I wanted to open my own restaurant, be my own boss, and make those decisions myself.”

Located in the Zed’s food hall in Southeast Portland, Pah! serves classic American pub food with a side of ASL slang.

“If you go to an Asian restaurant, you might see a menu that has Asian words on it and then English next to it,” Barrios says. “So we took that inspiration and got the ASL slang [with] the little explanation in English to represent our own language, our own community and our own culture inside that.

Barrios pointed out the pun for their fish and chips, which is called “Finish.” The ASL sign for fish and the word finish are similar, making the name a pun when signed. But menu names aren’t the only part of Pah! Everyone who works there uses ASL, even Barrios’ husband, who is the only hearing staff member.

“I had to teach Victor to keep his voice,” Barrios said. “When a hearing client comes in, I want them to learn the role reversal of feeling what it’s like to be in deaf shoes and trying to communicate.”

Barrios says that for customers who know ASL, it’s exciting to be able to have that dialogue with them and exciting to see them ordering easily. Especially because for some, this may be the first time they can use ASL to order in a restaurant.

“I’ve seen parents come in who can hear and maybe don’t sign as fluently, but their child who is deaf might sign fluently,” Barrios said. “It was really inspiring to see the child being able to order for the family and being proud and having just that moment to be able to respond in their own language.”

For those unfamiliar with ASL, they came up with a workaround: Pah! has a small microphone installed at the register that will pick up a spoken command and convert it to text on an iPad. They also use the counter to write if they need to clarify something or to let people know how long to wait for food.

“I see people’s faces are a bit confused at first,” Covarrubias said, “but then it’s kind of fun for them — like when they write back and forth, it ends up being a bit of an experiment.”

But it’s an experience that not everyone is ready for. A few months after Pah! opened, they were part of burger week, a city-wide event that featured nearly 50 restaurants creating specialty burgers. Even for seasoned restaurants, the event can draw overwhelming crowds.

“I overheard someone walking in, very excited for Burger Week, getting ready to order…and they saw the sign [that] pointed out that it was a restaurant for the deaf and they just turned around, left and left,” Barrios said. “It’s bad luck I guess, but I don’t want to chase them away and make it easy for them, I want them to learn.”

Part of Pah’s mission! is to bring deaf culture closer to the hearing world, something you can see at a monthly “Silent discussion eveningfor ASL learners.

V’Marie teaches ASL 1 and 2 at David Douglas High School and is an advisor for the school’s ASL Honor Society. Each month during the school year, the group hosts a silent discussion night with ASL learners in the community.

“It’s just amazing to be able to walk in and look left and see hands flying,” V’Marie said with a laugh.

Previously detained at a Burgerville, V’Marie approached Pah! about hosting Silent Chat Night at Zed, so students can use their ASL in a real-life setting.

Paa! has not only caused a stir locally, but has already seen customers from all over the country and even around the world.

“We brought in two people from Australia, two from India, Canadians,” Barrios said. “The hearing world is so big compared to the deaf communities [which] are so scattered. When we hear about a deaf company, no matter where they are, east coast, west coast, we want to go check them out. »

For Barrios, this is all just part of his five-year plan in hopes of eventually opening a deaf gay bar focused on deaf patrons with fully deaf staff.

Katie Thesing, a sign language interpreter, contributed to this story.