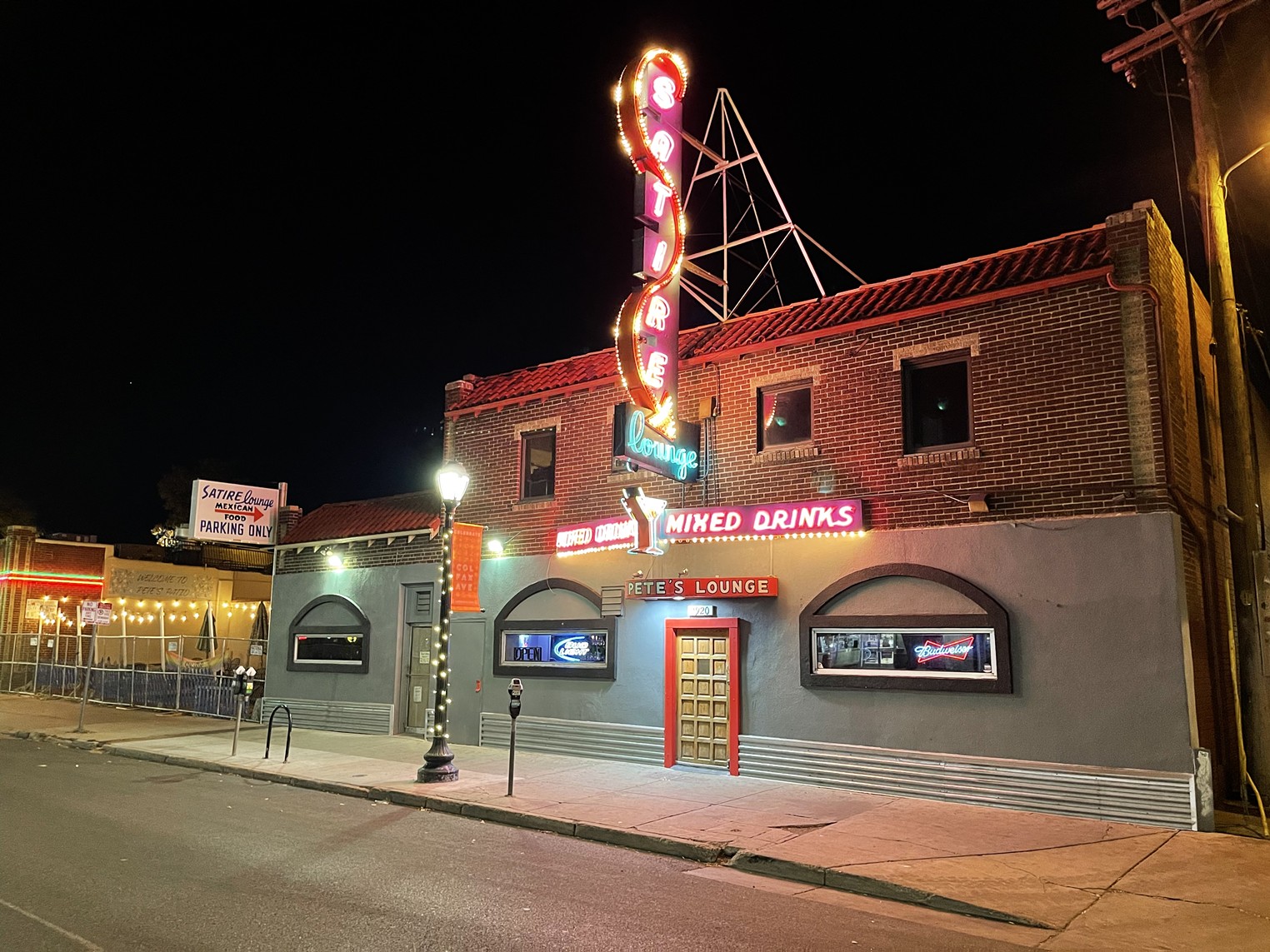 What do we mean when we mourn “old Denver?” You apparently meet everyone we’ve met at breakfast in Racines? Throwing in a stubby bottle of Coors while he was stuck in a wall-to-wall crowd in El Chapultepec? Going out of Colfax’s Rockbar or LoDo’s Rock Island for a cigarette? Rock On. “Old Denver” is increasingly a two-word code to mean “Denver was a lot cooler before everyone realized it was cool,” when rents were cheap, strangers were familiar and the city was filled with neon lights. TEAR?

Iconic fat spoons such as Tom’s and the Denver Diner are gone, soon revamped into something shiny and glass – a fate Annie’s Coffee can still meet now that his building has been put up for sale. But you may stumble upon Pete’s Kitchen at 1962 East Colfax Avenue, always full of people. Its famous flipjack neon sign is lit up as the kitchen is once again open for 24-hour service, at least on weekends. He is joined by a twin flame, the sign that winds for Pete’s Satire Lounge next door, reminding everyone that old Denver isn’t quite ready for the count.

Even if for a minute it almost was – at least for the folks who run Pete’s Restaurants, the family business behind Denver’s most familiar food and drink. Founding father Pete Contos passed away at the age of 85 in May 2019, turning the whole operation upside down. What was Pete… without Pete?

Difficult decisions followed. Pete’s family – his wife Elizabeth, son Dean, daughter Nikki Phillips and son-in-law Dean Phillips – closed Pete’s Gyros Place in Congress Park at the end of 2019. Pete helped the previous owner open it in 1976 and bought it in 1991. History buffs in old Denver may remember the place as a favorite of Alan Berg, the outspoken radio host whose 1984 assassination outside his house next door. inspired Oliver Stone Talk on the radio.

Not even a year after Pete’s death came a second blow: COVID-19. The Greek Town of Pete in Congress Park, Pete’s College Park near the University of Denver, and The Satire have all closed temporarily. Pete’s Central One in Wash Park and Pete’s Kitchen have moved to a limited take-out schedule. “Pete’s Kitchen was always, always open 24 hours a day. And suddenly it was like, ‘We have to lock the door?’ We didn’t know where the key was, ”says Pete’s grandson Alex Barakos.

With the pandemic raging, Barakos felt the urgency to join his family’s ranks in Denver. While studying hotel and restaurant management at Northern Arizona University, he apprenticed at his family’s restaurants during his first and second years. “Pete and I were going to the back of Greek Town, and he taught me how to pour drinks from a water bottle,” he recalls. “” It’s short “or” It’s over. He really beat me. When Alex returned to Colorado in April 2020, there was no time to pour drinks – nor anywhere to pour them. The take-out models only kept the lights on at Pete’s Kitchen and Pete’s Central One, but uncertainty over the COVID rules kept the satire and the Greek town dark. Pete’s University Park managed to come to life in June 2020 as the meals inside returned. Staff issues and tight margins made reopening the vast Greek town of Pete a losing proposition, so the family put the building up for rent in November 2020.

Between all the hubs was Satire, perhaps the oldest Denver of the bunch. Once owned by former University of Denver football star Sam Sugarman, it operated as a sports bar dubbed Sugie’s Lounge until 1960. It was at this point that Sugarman looked into the folk music scene. growing from Denver and renamed his place the Satire, built a stage and hired local legend Walt Conley as a booker. The pre-fame Smothers brothers lived in an overhead apartment and performed regularly as an actor in the house. That summer even Bob Dylan performed there – that is, before he was kicked out of town by Tom and Dick Smothers, well-groomed comedians who didn’t get the gruff number. and woody woody Guthrie of Dylan.

Pete Contos and a business partner reclaimed Sugarman’s location on December 1, 1962, launching a nearly six-decade legacy that has made Pete synonymous with old Denver. While many Denverites, new and old, say “Pete’s” as a shorthand for Pete’s Kitchen, the Satire was the first to carry the name Contos. Pete’s Kitchen didn’t come until he and Elizabeth bought the restaurant in 1988.

Keeping Pete’s Satire Lounge dark might have cast a shadow over the entire story that came out of it. Yet even amid the easing of pandemic restrictions, it remained empty throughout 2020. “I don’t know if this place would be open if I didn’t constantly push my family to roll coins. We held on until we knew we could go full steam ahead, and that was February of this year, ”said Barakos.

And so: neon is back, at least five nights a week, and Pete’s Satire Lounge is preparing to kick off his 59th year with warm familiarity. Stumble over, sit down for a moment, and you’ll hear Joey Mestas – the jolly jack-of-all-trades who has been working there since February 1972 – whose “Plates Are Hot!” Have a good time ”, the slogan is an institution in its own right. Behind the bar is Shannon Hollingsworth, just as she has been since 2003 and just as her mother, Tannia Chamberlayne, was before her. Longtime regulars sit around business stories, like the one about the box of dented cream corn perched atop the bar, abandoned one night by a regular who disappeared shortly after; or Chamberlayne’s wedding there, when she was offered by Pete; or the shimmering black ceilings wiped off in a 2009 renovation. Just like they did generation after generation, these people are screaming names as their friends arrive, singing the booming 70s, 80s and 90s standards of juke- box and fork out drinks for other barflies – new and old – as things start to get blurry.

As heartwarming as it may be to the people of Old Denver, there are some differences and more changes are on the horizon. For starters, the Satire is not currently a Mexican restaurant. His kitchen is closed, although Joey will be happy to pass you a Pete’s Kitchen hotplate.

And there’s no Pete at Pete’s Satire Lounge. But there’s Barakos, a young gregarious graduate who has managed to fill the place with friends his age – kids who maybe could quote a Bob Dylan song, but who sure have never heard of the Smothers Brothers. .

Alex Barakos transforms the old non-smoking room into an arcade.

Between the quarters behind the bar and in the line next to Pete’s Kitchen, Barakos hopes to write the next chapter of satire. In a few strokes, it’s a return to the roots of the bar, like the exchange of the blinding lights installed by Pete to calm the din of a smoke-filled dive. Others are more spectacular, such as construction underway to convert the abandoned non-smoking section of the restaurant into an arcade, with plans for a “Welcome to the Tire” neon sign adapted for Instagram. Mexican food will come back once the kitchen renovation is complete, though it is “fun,” “to share,” and “modern” “bar bites,” says Barakos. Old school regulars return night after night, but sometimes their well-worn seats are occupied by tidy young professionals waiting for a round of karaoke.

So what do these regulars think about all of these Zoomer-led transformations along this famous stretch of Colfax? So far, so good, said Hollingsworth, who would know. “We always have the same regulars that we always have, but there are also new ones,” she says. “I’ve worked here my whole adult life, and it’s the same place. But Alex brings in some fresh air, which is what we needed.

Longtime patron Wade Kresak agrees. “It’s satire. It can’t be cool, ”he notes. “But whatever you do, it will be ‘cool kickback’, not ‘cool status’. It’s Colfax.

Satire became satire when Sam Sugarman changed the name and format. It morphed into a Mexican cantina after 22-year-old Pete Contos took it over in 1962. He has changed it several times over the years. This is bound to change again. After all, earning Denver’s former status isn’t enough to challenge or resist whatever is going on around you. You must adapt and survive each successive wave of new Denvers until the collective memories fade.

Strong, cheap drinks help with that, and Barakos promises these aren’t going anywhere. “The goal is not to change places completely to gain new customers,” he said. “It’s about keeping seats ready for our regulars while creating an intimate and affordable space that teaches younger ones why they should be drawn to places like this.”

Along the way, Barakos strives to host the kind of events, like Friday night and Sunday night karaoke, that these new regulars might remember decades from now as a tradition of their old Denver era that will continue. to be reborn again and again. throughout their life.

But old-fashioned cool will always find its place here. “If ever Bob Dylan wanted to come back and redeem himself,” Barakos laughs, “satire would welcome him with open arms.