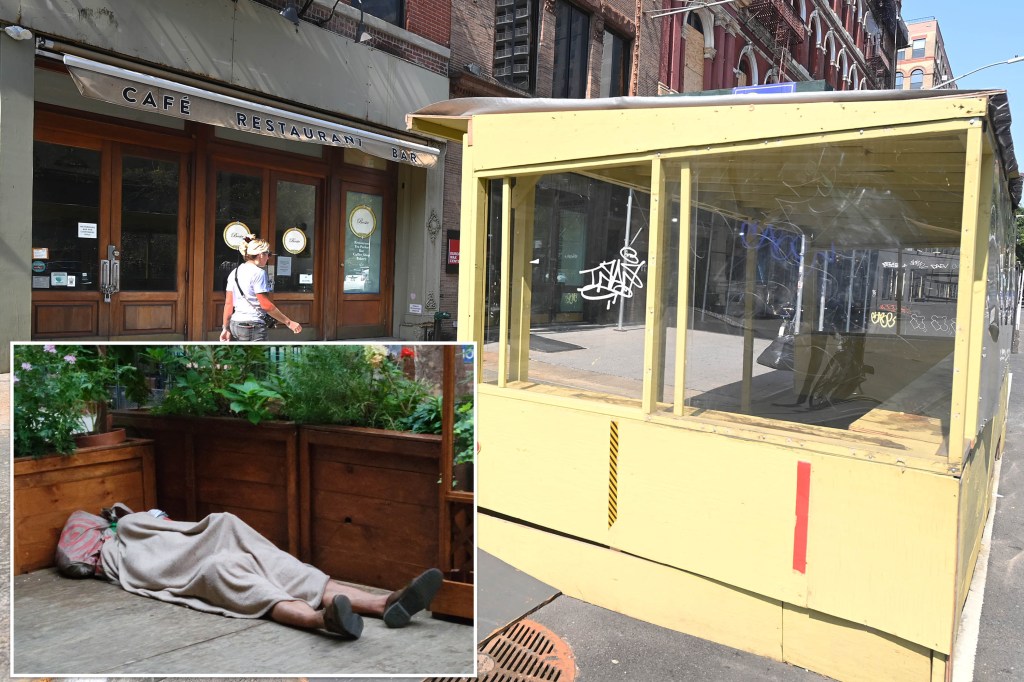 These culinary catastrophes turn into slums for the homeless, giant landfills and storage sheds blocking traffic.

Outdoor dining structures that were once meant to bring the struggling restaurant industry to life during the COVID-19 pandemic are now either abandoned after restaurants close or have refocused on indoor dining.

Three abandoned outdoor facilities were until recently on a single previously occupied block of LaGuardia Place in Greenwich Village between Houston and Bleecker Streets.

A graffiti-covered outdoor cabin belonged to Bosie, a French restaurant that served afternoon tea and had its doors padlocked since August. It was not withdrawn until the end of last month.

Next door, at the Souk, which in its pre-COVID glory days featured belly dancers and a hookah lounge, another wooden structure stood empty.

And the abandoned third setup offered outdoor space to the old GMT Tavern, which closed after a devastating fire on April 19.

â€œThese sheds are an eyesore – people now dump garbage in them. Why are they in place months after restaurants close? Someone complained in a July complaint to the Ministry of Buildings, which said no violation was justified.

But a local resident called the area below the dining room a “breeding ground” for rats and expressed little hope that the structures would be removed anytime soon.

“It is not economically feasible for owners or (former) tenants to remove them, and the city does not have the political will to do so,” he said.

Leif Arntzen said he sees homeless people sleeping in the dining sheds on his Cornelia Street block “all the time” after restaurants close for the evening or on days they are not open.

The covered shed outside the Uncle Chop Chop restaurant, which is a cut above regular plywood, is very popular, he said.

â€œI think they choose it because they have that kind of AstroTurf on the sidewalk that they can just lay out on,â€ said Arntzen, who is part of the CUEUP alliance that opposes making the permanent “open restaurants” program.

Residents complained last spring that an unused and dirty shed outside Ajisen Ramen on Mott Street in Chinatown was becoming a dormitory for the homeless. Then the restaurant put doors on it and started using it as a storage locker, with only a lonely dinner sitting inside one recent night, according to a local observer.

The only thing occupying the outside hangar at Jua, a Michelin-starred Korean restaurant in the Flatiron district, on a recent weeknight, were cardboard boxes.

Restaurants are not allowed to use their outdoor huts for storage, according to the Department of Transportation, which oversees the open dining program.

MP Deborah Glick, who represents Greenwich Village, Soho and Tribeca, tweeted Tuesday about an empty structure outside a restaurant that has never opened saying “there remains a huge structure since JUNE with various violations – cease and desist @NYC_DOT and still no action” .

The hangar is not abandoned, according to the DOT.

Nearly 12,000 outdoor facilities line the streets of the city, including 1,202 located in the roadway; 4,295 on the sidewalk; and 6,047 which are a combination of sidewalk and street, according to DOT statistics.

The DOT said it only considers an abandoned dining setup if the restaurant is permanently closed. He ordered the sanitation department to remove just 21 of these deserted dens throughout the city.

But there are still many more.

A total of 136 complaints about abandoned catering facilities were filed with 311 between May 6 and September 23, although some concerned the same restaurant, according to city records.

It took more than two months and many complaints to remove the shed – which had become a storage area – belonging to the former Fabiane restaurant on North Fifth Street in Williamsburg.

â€œIt took over two months of metered parking,â€ said Shannon Phipps, head of the Berry St. Alliance in Williamsburg and Greenpoint, who noted there were several other unused setups in the area. “I suspect that the longer this program exists, the more these conditions will appear, especially because there is no enforcement, management or oversight.”

Two apparently unused wooden corrals flank the Slaughtered Lamb Pub on West 4th Street. The bar manager said the structures continued to be hit by cars or trucks and he did not want to seat customers there.

The DOC Wine Bar in Brooklyn had two hangars, one of which served as storage. A restaurant manager said it was pulled last week after the city said it was too close to a fire hydrant.

The restaurant was not the only one to flout the rules.

A city council survey of 418 downtown Manhattan restaurants released in August found that 93% were not complying with at least one DOT directive, including blocked hydrants, barriers stretching too far in the street and the amenities in the streets too narrow.

The DOT said it was reviewing the locations shown in the report and would meet with the office of Council Chairman Corey Johnson “soon to discuss next steps.”