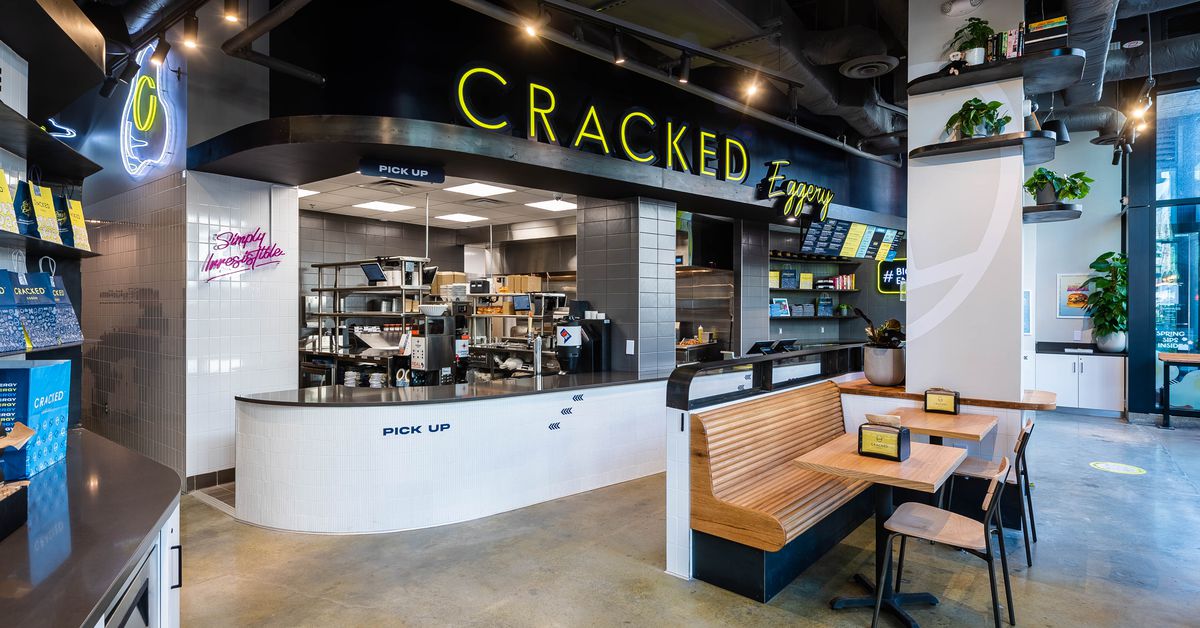 DC’s fast-growing Cracked Eggery busts open their long-awaited doors at Shaw this weekend, bringing much more to the neighborhood than just its basic breakfast.

Starting Saturday, April 2, customers can stroll through the energetic, neon-lit shop from 7 a.m. to 3 p.m. daily to stock up on inventive and deliciously messy egg sandwiches, bowls built on tots or veggies and other dinner classics remixed (1921 8th Street NW). The Southern Charm is a next-level BLT with fried green tomatoes, chili cheese, arugula, and lemon aioli on a challah bun. The Animal slips a hash brown into a bacon, sausage, egg and cheese sandwich – a now familiar “hack menu” that Cracked Eggery first invented.

“I think someone at McDonald’s caught wind of what we were doing,” co-owner Mike Tabb jokes.

His new dish certainly falls on Burger King’s French toast sticks (but with better carbs, of course). Cracked Eggery has sourced its chunky challah buns from Lyon Bakery in Maryland since day one, when the brand first hatched at a farmer’s market. A food truck joined the group in early 2020, followed by its first physical location in Cleveland Park last fall.

Co-owner AJ Zarinsky dreamed up the six-stick creation a few months ago while experimenting with a new use for his sandwich building block. Turns out a whole cut and fried challah bun dusted with powdered sugar is delicious.

“He was joking about it but brought them out and said ‘we gotta have this’. They’re unreal and took off like crazy,” says Tabb.

During part of the pandemic, Cracked Eggery parked its food truck outside its future Shaw store to showcase the neighborhood on the menu. The original plan to make it a 24-hour operation to feed a late club crowd at 9:30 a.m. is on hold for various reasons.

“With COVID, nightlife and staff, we’re going to do what we do best — breakfast and lunch — and grow from there,” says Tabb.

Its schedule from 7 a.m. to 3 p.m. will be adjusted accordingly according to demand. Cleveland Park opened with the same hours, which have since extended to 8 p.m.

Shaw’s range of 15 sandwiches caters to a range of cravings from day to night, including a double bacon cheeseburger constructed with Pat LaFrieda beef patties and a pulled pork sandwich topped with fried eggs sent on trays of money.

Six bowls also have multiple personalities, such as a Seoul Mate made with sushi rice and sous vide pork belly or a salad of Brussels sprouts, sweet potato and quinoa. Poultry is the last protein in the mix, and chicken tenderloins appear in a popular The St. Elmo’s fire bowl alongside toddlers, Buffalo sauce, blue cheese, shredded cheddar, fried eggs and green onions.

Fresh-off-the-grill sandwiches are assembled with homemade sauces; eggs from Lancaster, Pennsylvania; cheese from Firefly Farms; and Logan’s Sausage Bacon, Pulled Pork and Chorizo ​​Patties from Alexandria. Its longstanding local mantra has paid off during the pandemic as supply chain shortages continue to stall shipments.

The 14-seat space invites diners to sit down and stay – or leave. An entire area devoted to take-out shelves allows customers to quickly retrieve their portable sandwiches and bowls.

“Delivery has been almost half of our business, which is crazy,” he adds.

While the Cleveland Park space is long and thin, Shaw’s expansive layout highlights its open kitchen as customers walk along the curved order counter.

“We do everything in-house as much as possible and all the food is cooked fresh – not only do you see it, but we want to make it well known,” he says.

The expansion-minded brand is already on the hunt for additional locations in Bethesda and Arlington, and each plans to maintain its own identity. Shaw’s logo works in a saxophone to pay homage to the neighborhood’s jazzy roots. The opening of Cracked Eggery also brings more of the same slow drip, cold brew to the strip (its Compass Coffee supplier has an existing store next door).

Treat yourself this Easter to Torrija, the delicious Spanish version of French toast