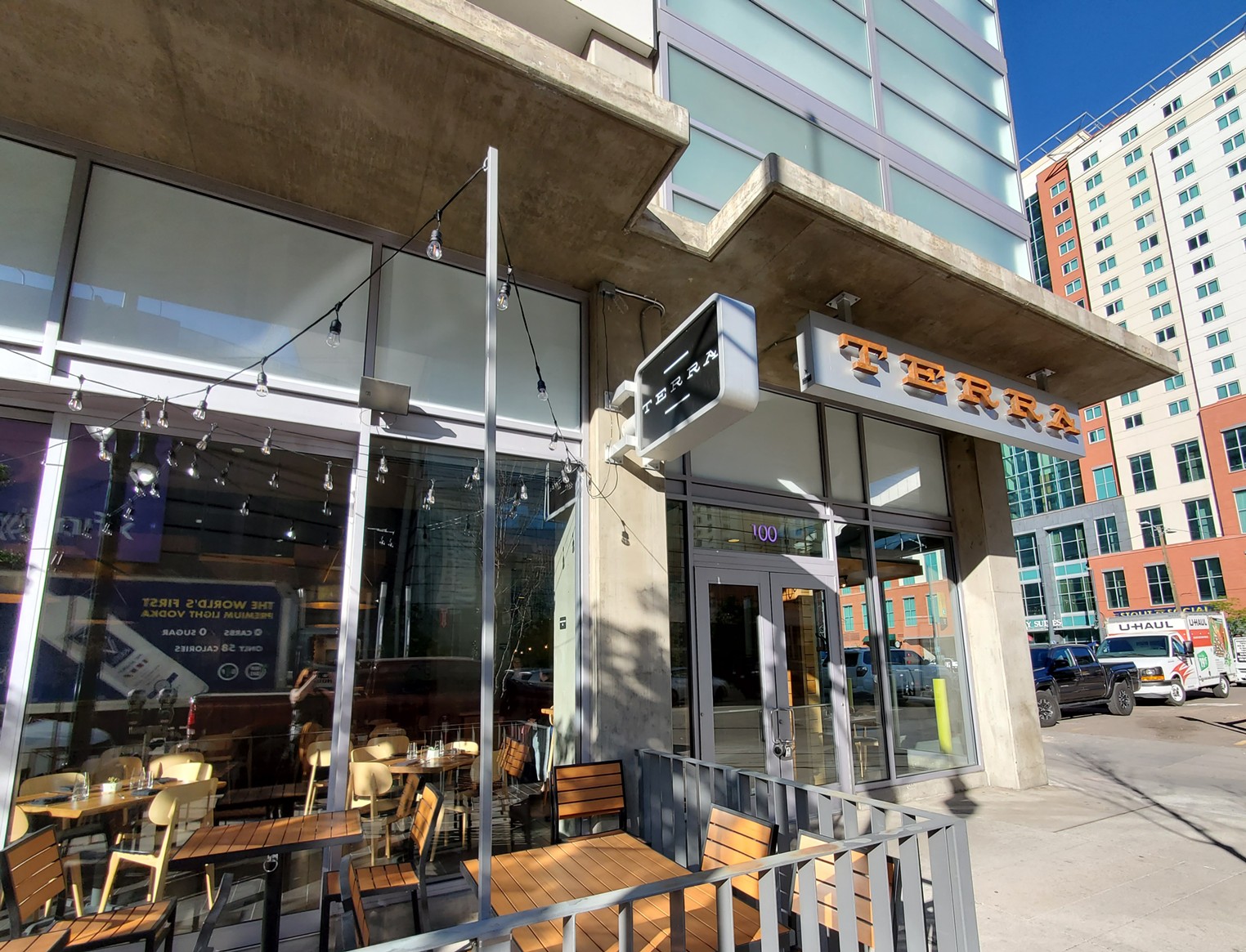 Only one restaurant debuted this week. Terra, located across from the Colorado Convention Center in the former home of Uncle Joe’s Hong Kong Bistro, officially opened on May 26. Chef/owner Scott Schaden is originally from Boulder and has worked in kitchens since the age of fifteen, including at Colt & Gray and Pizzeria Locale under the Frasca Food and Wine group.

After spending time living and working in Chicago, Schaden moved back to Denver just before the pandemic hit and decided it was time to open his own home. “I want to represent our region and our flavors,” he says of the concept. “So chili peppers, corn are going to be king, squash, beans, juniper, blueberries, Alaskan salmon, Washington oysters, Southern California tuna. All of those things. You’re going to get the generosity of the West.”

A bar also opened this week. 12 Spirits Tavern is located on the ground floor of the historic (and supposedly haunted) Patterson Inn, which owner Chris Chiari bought in 2018. The space is meant to be an extra amenity for guests of the hostel first and foremost, but Chiari also hopes it will be a before or after dinner stop for locals, especially those who regularly pass by the building but have never entered. The Patterson Inn is also the first hotel approved for the social use of marijuana; the weed-friendly lounge, located at the opposite end of the property from the bar, is slated to open this fall.

Chili oil wontons from Little Chengdu/Blue Ocean, which will close on May 31.

The onslaught of closures continues this week, with three to report and three more closures in the coming days. At the end of April, a message on the Ale House website announced its temporary closure – but it turns out the restaurant has closed permanently. The space was usually a favorite this time of year due to its rooftop terrace, but competition in the LoHi neighborhood, combined with slow sales during the pandemic, ultimately knocked it down. Looking for other rooftops to go out this summer? We have what you need.

Allegro Coffee Roasters on Tennyson also closed, along with a place with perhaps the worst name for a restaurant in metro Denver: Dirty Pit Craft House. The Littleton spot was open for less than four months before it quit amid claims of unpaid wages by former employees, according to a 7News report.

On Saturday, May 28, To the Wind will serve its last meal on East Colfax, ending an eight-year run in which the little place was considered one of the best restaurants in town. The next day, May 29, will be the last hurray for Freshcraft. And on May 31, one of Denver’s few Szechuan restaurants, Little Chengdu/Blue Ocean, will say goodbye, taking with it the hand-pulled noodle skills of chef/owner Jack Ning.

In other openings and closings news:

Here is the full list of restaurants and bars opening and closing this week:

12 Spirits Tavern offers a concise menu of cocktails and snacks.

Restaurants and bars open this week:*

Restaurants and bars closed this week:*

What did we miss? Send a note to [email protected]

Fun Things to Do in Nashville – Your 2022 Guide