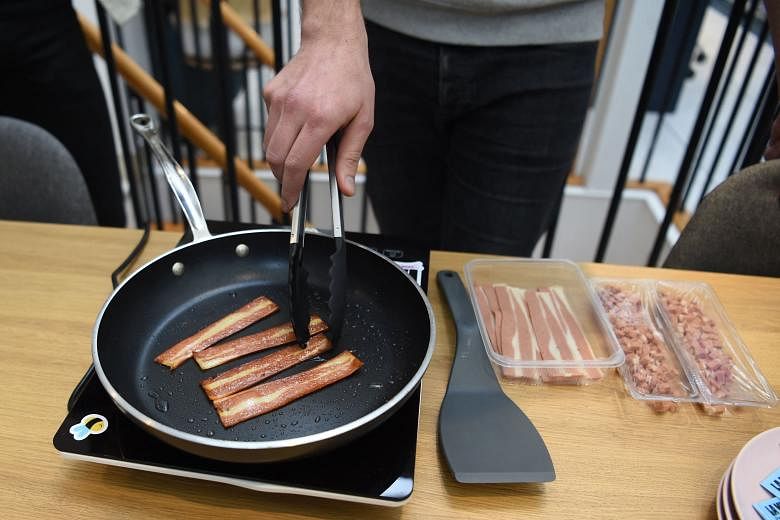 PARIS (AFP) – Vegan bacon sizzles on a frying pan at the offices of a French startup whose quest to produce the “holy grail” of the growing plant-based meat industry has won the financial backing of Hollywood star Natalie Portman .

While they weren’t the first to market vegetable bacon, the founders of La Vie bet their success on mastering the imitation of pork fat, which sets it apart from other brands.

“We are today the only ones in the world to have succeeded in developing a vegetable fat that cooks, frys, infuses and browns” like animal fat, enthused the CEO and co-founder of the company, Mr. Nicolas Schweitzer.

After several minutes on the pan, the slices of La Vie’s imitation smoked bacon were golden brown, crunchy, and tasted similar to the real McCoy.

Then come the bacon bits. Cuts of meat and fat also brown well, but are a little salty.

“We also have a low-salt version,” says Mr. Vincent Poulichet, 32, the company’s scientific expert and another co-founder.

The bacon bits received a C rating on the French “Nutri-Score” food health assessment scale – an average rating on the A to E classification.

“Worse than broccoli, but better than pork lardons,” the company ironically notes on its website.

Startups and established food manufacturers have rolled out a variety of products aimed at replacing beef, chicken, and pork with plant-based ingredients.

But making the fake bacon taste like the real thing is another challenge.

A growing number of consumers are looking to reduce or eliminate meat from their diet due to concerns such as animal rights and the industry’s impact on the environment.

According to a 2021 report by market research firm Euromonitor International, more than one in four consumers worldwide say they try to limit their meat intake, in addition to the 10% of people who are vegetarian or vegan.

The founders of La Vie, who started their company in 2019, believe that winning over consumers on taste is the real key to success.

“After three years of research and 5,000 trials, we succeeded in the somewhat crazy challenge of replicating the taste of pork,” said Schweitzer, 34.