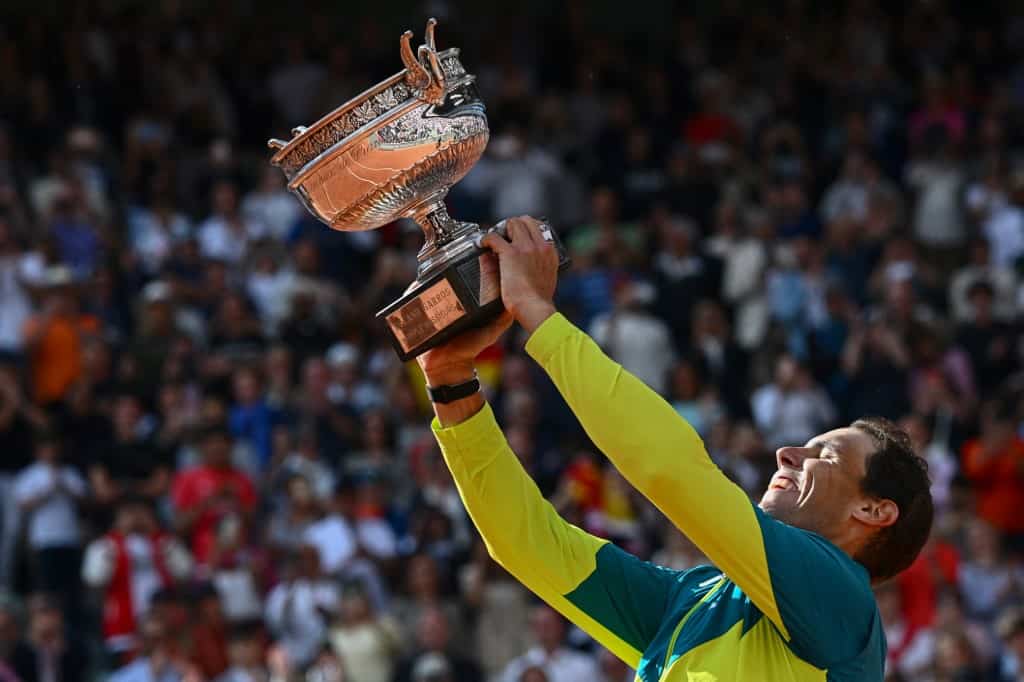 Rafael Nadal was even uncertain of playing at Roland Garros due to a chronic left foot injury, but the ‘king of clay’ finished the fortnight in Paris with a record 14th Roland Garros crown.

The 36-year-old has carved out one of the greatest sports careers of all time despite lingering injury problems, a trend that has continued into 2022.

He took his career tally to 22 Grand Slam titles on Sunday, beating Casper Ruud 6-3, 6-3, 6-0 in the final, two ahead of Roger Federer and Novak Djokovic to top the all-time list. . .

Nadal said earlier in the week he would rather have a new foot than another French Open trophy but vowed to fight back after lifting the Coupe des Mousquetaires again.

“I never thought I’d be here at 36, being competitive again, playing once again on the most important court of my career in a final,” Nadal said at the trophy presentation. .

“I don’t know what can happen in the future, but I will keep fighting to try and keep going.”

The left foot problem caused Nadal to miss Wimbledon, the US Open and the Tokyo Olympics last year and he only returned in preparation for the 2022 Australian Open, which he won for the second time.

But after losing to Taylor Fritz in the Indian Wells final, the Spaniard had to skip the start of the clay-court season in Monte Carlo and Barcelona due to a stress fracture in his ribs.

He returned home for the Madrid Masters but was knocked out by teenager Carlos Alcaraz before losing to Denis Shapovalov in the Rome last 16.

Nadal arrived in Paris with question marks over his fitness and titles, but he still went through long games against Felix Auger-Aliassime, Djokovic and Alexander Zverev en route to the final.

Whether or not he is back in the French capital next year for a tilt at a 15th title depends on his troublesome left foot.

“I have what I have in my foot, so if we are not able to find an improvement or a small solution on this, then it becomes super difficult for me,” admitted Nadal.

Many pundits have consistently predicted that Nadal would struggle to enjoy a long career due to his grueling style of play and he has proven them wrong time and time again since.

Nadal’s first enforced absence from the ATP Tour came at the age of 16 in 2003 when he injured his elbow in a fall during training and had to miss the French Open.

Since then, he has been forced to miss at least one tournament every year of his career.

Nadal suffered a series of knee and foot injuries, as well as hamstring pulls, a torn wrist tendon and abdominal muscle strain, among other issues.

He even played briefly with bandaged fingers after accidentally burning himself in a restaurant in 2011, while also missing the end of the 2014 season due to appendicitis.

Despite missing so many events, Nadal’s will to win has seen him win 92 ATP titles and win 1,058 matches on tour.

When he failed to reach a Grand Slam semi-final in 2015 and 2016, many wondered if his career was coming to an end, but he has since won eight more Grand Slam titles.

“For me, it’s amazing to play here,” he added. “It’s an incredible feeling.”

The focus will now be on whether Nadal is fit enough to play at Wimbledon, where he would still arrive on course for a Grand Slam on the calendar for the first time in his career.