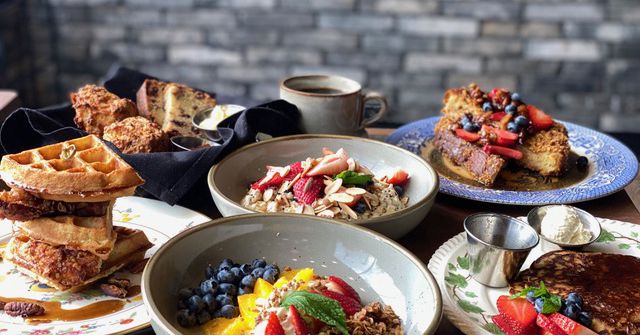 Matt and Tony’s All Day Kitchen + Bar, which opens Wednesday, March 16, comes from first restaurant owner Matt Sloan, who previously ran indoor operations at Daikaya and Matchbox and helped open nearby Ada’s on the River.

Matt and Tony’s, a family establishment, occupies a 127-seat space left by the ephemeral Charlie’s On the Avenue (1501 Mount Vernon Ave, Del Ray). Before that, it was FireFlies – where President Barack Obama curbed a burger craving in 2014.

A few years ago, Todd Miller, then pastry chef at Ted’s Bulletin, was leading the mass production of his cult riffs on Pop-Tarts. At Matt and Tony, Miller’s latest childhood remix is ​​a Rice Crispy-like bar with peanut butter fudge and chocolate.

Familiar comfort foods with a twist include mornay cheddar mac and cheese curls and crispy jalapeno, and a turkey meatloaf is drizzled with a barbecue balsamic drizzle.

A drink program filled with spritzes and sangrias includes cocktails like a vodka-based “Wild Goose Chase” with apple and St. Germain and a tamarind and tequila “Phoenix.”

The “Tony” part of the name pays homage to Sloan’s great-grandfather, an Austrian immigrant turned acclaimed New York baker (he even baked rye bread for the inauguration of President John F. Kennedy, says Sloan). Breads and pastries are naturally at the center of the menu, starting with baskets of cheddar and shallot biscuits through to anytime desserts like “Tony’s” pie (Viennese chocolate cake) and bread pudding. spice.

Matt and Tony’s opens with dine-in service until 9 p.m. (and 10 p.m. Friday and Saturday), with takeout and delivery to follow.

The owner of Bold Fork Books is a cookbook obsessive. Here are his favorites.