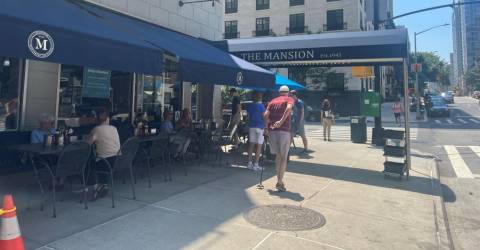 Dining on the Upper East Side is undoubtedly one of New York’s most special experiences. The neighborhood has plenty of long-time favorites as well as an abundance of new, unconventional spots. And there’s a surprising diversity of places to eat, ranging from cultural hotspots to decades-old landmarks. When exploring the Upper East Side’s various offerings, it’s rewarding to discover places that encompass the neighborhood’s character in unexpected ways.

To effectively experience Upper East Side dining options, try to eat each meal of the day at a different location:

Breakfast at the Mansion Diner: Located at 86th Street and York Avenue, The Mansion has become a fixture in Yorkville, attracting members of the police force, late-night partying teenagers, and many other local demographics. The restaurant has been around since 1945 and has operated as a “neighborhood dining spot for families, singles, college students, taxi drivers and the occasional passerby” for nearly eighty years. It serves a variety of delicious classic dishes with many new additions that make the menu interesting. The restaurant does not take reservations, but walk-in customers are normally seated within five minutes despite the restaurant’s immense popularity. While The Mansion’s food always remains appetizing throughout the year, the restaurant’s ambiance is further amplified during the holiday seasons. The Mansion hosts holidays like no other restaurant, with incredible decorations inside and outside the store, further expanding the appeal of the restaurant.

Casual Lunch at JG Melon: Lunch on the UES can either mean a quick bite to eat at one of the many burger joints or eateries located in the area or, conversely, a fine dining experience at one of the upscale establishments. JG Melon has long been one of the neighborhood’s most famous and beloved burger bars. Located on 75th Street and 3rd Avenue, the pub accepts cash only as a quirky nod to the past. The restaurant’s undeniably cozy ambience attracts a laid-back clientele only interested in the tasty menu choices and relaxed atmosphere. Since 1972, the restaurant has been known for its burgers and finger food accompanied by their expertly composed drinks. The impeccable quality of the food has not gone unnoticed by the public or food critics, with queues stretching into the hundreds at peak times. The Michelin Guide has cited the restaurant, aptly calling the institution coveted yet timeless.

Upscale lunch at the Mark: Mark’s restaurant at 77th Street and Madison Avenue has become a favorite of Upper East Siders crowds, offering a range of French-American meals throughout the day. Jean-Georges Vongerichten opened it over a decade ago at the Mark Hotel and its popularity has remained relatively constant ever since – for a reason. The restaurant attracts a clientele ranging from low-key regulars to international celebrities showcasing their unique yet decadent styles. The restaurant’s pink chairs and dim lights create a sophisticated and tasteful atmosphere, which perfectly complements the tasty food. The Mark combines French and American classics with some distinctive twists, including recent additions of crispy salmon sushi and hamachi sashimi. Both dishes work perfectly as small bites or shared appetizers, especially when paired with the contrasting yet complementary pea guacamole. After an entree, the Caesar salad is a light but tasty choice that can be ordered with any of their phenomenal four-slice pizzas. The Mark constantly offers innovative dishes in an elegant setting.

Dinner at Sushi de Gari: Sushi in New York is a much-loved cuisine, and Sushi of Gari at 78th Street and First Avenue has long been known as one of the best Japanese restaurants in town. Although the menu prices are undeniably high, the finely assembled food is unparalleled. Mastoshi Gari Sugio was captivated by the art of food, especially sushi, from an early age and has since dedicated his life and career to helping others properly appreciate sushi. This eventually led to Gari creating several different sauces that pair perfectly with various sushi and sashimi dishes he now serves at his restaurant. The maguro tofu stripu dish consists of mashed tofu placed on a slice of bluefin tuna and a bed of hot rice. The sauce that comes pre-paired with the piece is a hand-selected sesame chili oil that cuts the intensity of the flavors beautifully. The dish is one of the restaurant’s most famous and is an example of the intricate planning and execution behind every piece of sushi served at the restaurant.

Ice cream at Anita La Mamma del Gelato: To wrap up a day of dining on the Upper East Side, Anita La Mamma del Gelato on Second Avenue and 81st Street is an obvious finale. The ice cream shop opened in 2020, and just two years later it’s become an immensely popular spot, often with lines around the block. The tantalizing flavors of the shop more than make up for the wait. Anita offers cream, vegan, and sugar-free gelato options, as well as their new addition of frozen yogurt. Whatever your favorite flavor, there’s almost always something comparable if not better available in the store. And since the shop’s humble beginnings, all products have been completely handmade, which is evident from the first lick.

The Upper East Side continues to prove itself as a champion of upscale, casual dining. No matter the time of day, there’s always a delicious option available within walking distance.