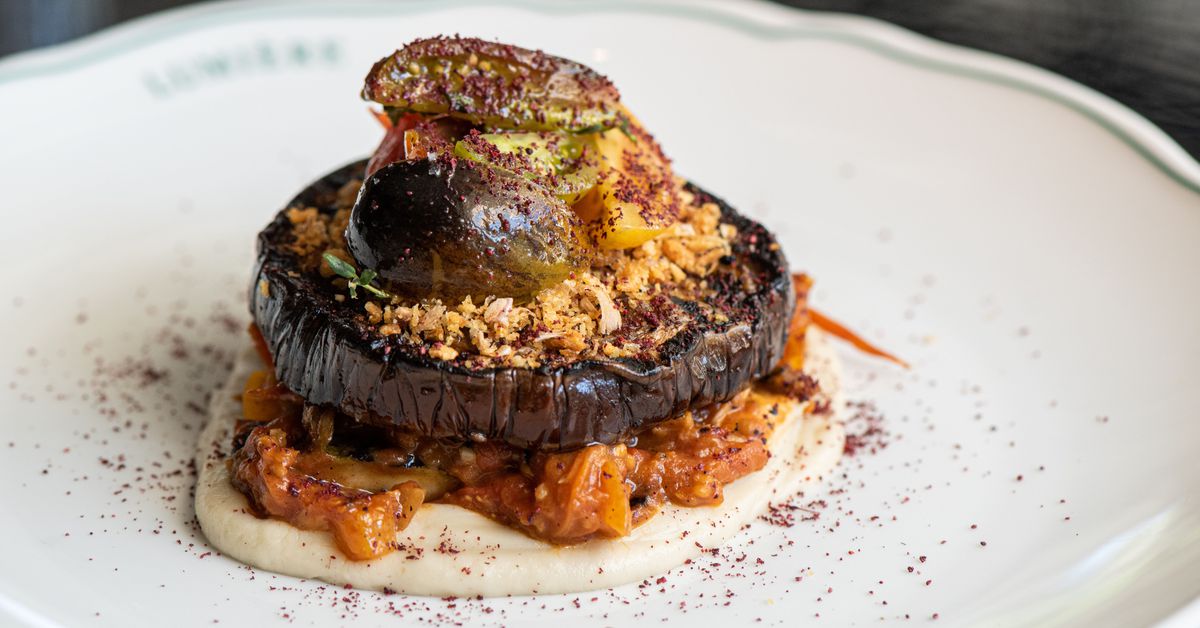 Originally built in 1966, the Century Plaza Hotel in Century City is a truly iconic Los Angeles location, hosting presidents and accolades over the decades. Today, after years of renovation, the building designed by Minoru Yamasaki is reborn today as the Fairmont Century Plaza, with two towers looming behind and a whole new look in its famous curved tower. And there’s a new French brasserie downstairs called Lumière, which also opens today with veteran general manager Paul Quinn (previously at Quince in San Francisco, and locally at Bao Hiro) and chef Ramon Bojorquez lead. the show.

The somewhat sprawling restaurant comes with a welcoming entrance that gives way to a semi-open kitchen to the right and a pastry and bakery to the left. Intended to serve both the neighborhood and the nearby office towers, this front area resembles a cafe, with benches and tables that will serve breakfast and lunch. Go further and find a gorgeous zinc cocktail bar and wooden cabinets that should be the center of attention at aperitif time and most evenings.

Dotted with antiques from France, the unconventional space has a lot of built-in character, from fixtures and lighting to signs. Even the dining rooms have different vibes, from black veneer tables with pastel accents to the wide garden patio that could very well become the place of celebrity lore, like the Polo Lounge. There is a private dining room called Writer’s Room with 1920s decor on the nose meant to evoke the Hemingway / Gertrude Stein / F. Scott Fitzgerald ambiance of Paris.

The space, constituted by EDG design, will certainly be a talking point, with Lumière’s central location in the middle of the Hollywood shopping district, i.e. Creative Artists Agency, headquartered across the street (which has just announced its acquisition of ICM Partners, another Century City-based mega talent agency) – probably doing a lot of handshake deals here. The Fairmont’s restaurant looks set for the awards show afterparties and lush photoshoots of Vogue and Power Brokers, but in reality, the heart of Lumière serves up a familiar and accessible ensemble of robust French classics with a twist. of the.

Bojorquez, a Mexican chef raised near the border and now a veteran Angeleno, knows exactly what the LA restaurant wants. The chef spent time at Trois Mec under Doug Rankin and Ludo Lefebvre, then went with Rankin to establish the Bar & Restaurant in Silver Lake as one of the less well-known new openings in recent years. At the Bar Restaurant, Bojorquez and Rankin’s menu effectively captured a modern menu with French accents with seasonal produce and excellent style on the plate. Here at Lumière, Bojorquez is keen to make a solid first impression as an executive chef, serving a gorgeous pan-seared sea bass with roasted salsify and onion soubise, or a dry-aged, bone-in New York strip with a pepper sauce and a side dish. fries. For starters, there’s classic French onion soup in a goblet, as well as seafood towers (filled with oysters, lobsters, and caviar), cold cuts, and cheese platters.

When it comes to drinks, expect plenty of French inspiration, like a pineapple and martini-tinted gastric from Chambord, or a cobbler with citrus and mint vermouth. A Russell’s Reserve “Century Plaza” bourbon transforms into a choppy old style as Century City blends mezcal, Californian speculator Argonaut brandy, vermouth and ancho reyes. The wines feature primarily a French selection, such as a solid 2019 Morgon from Domaine de la Bêche, although California sprinkles the blend with a 2016 Ramey from Russian River Valley.

It had been a long time since such a remarkable restaurant opened in Century City; Hinoki and the Bird debuted in 2013, while Craft opened in 2007. Between those two and Eataly, which entered Westfield in 2017, there have been a few other notable restaurants like Meizho Dongpo, Din Tai Fung, Del Frisco’s Double Eagle and Javier. But the neighborhood can certainly make use of a Republic-style all-day restaurant that has style, decor and flavor at the same time. Hopefully Lumière can fulfill this role.

With dinner service to begin with, Light at the Fairmont Century Plaza opens tonight with hours from 5 p.m. to 10 p.m. and then possibly breakfast and lunch service in the coming weeks.

A jaffle maker will revolutionize your toasted sandwich game