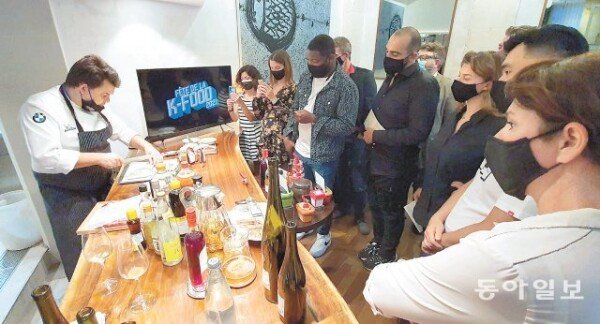 “How did you make this sauce?” I think there is something other than gochujang and doenjang.

Renowned French chefs came to Solstice, a one-Michelin-starred restaurant in Paris’ 5th arrondissement, around 6 p.m. Tuesday to learn how to cook Korean dishes from owner and chef Eric Trochon (57). Married to a Korean in 2014, Trochon traveled to Korea several times to study various Korean dishes and introduced them to France.

Trochon demonstrated how to make lobster kimchi dumplings (European style dumplings), foie gras made with sesame oil and seaweed, steak cooked with oyster mushrooms and ssamjang, and dough-based candies. soy and caramel. Twenty chefs were busy writing down the uses and characteristics of Korean cooking ingredients on their smartphones and laptops while tasting the dishes.

The meeting was organized by the Korea Agro-Fisheries & Food Trade Corporation (aT) Paris Center. “We were concerned that proud French chefs would be reluctant to participate,” the center said. “Contrary to our expectations, many chefs came to discover Korean cuisine. Sophie, chef of the vegetarian restaurant “Hehi”, said that she wanted to create a new dish using vegetables and the fermentation method, which is the strength of Korean cuisine.

Fieldra, who works as a chef at “Le Rayon”, said she would prepare a new dish combining chogochujang (red pepper paste with vinegar) with French sauces, adding that she wanted to surprise people with her dish. “The strength of Korean ingredients is that they are mysterious,” said Olivier, who runs “Boca” fusion restaurant. “They taste great and it’s really fun to try them as a chef because I don’t know the recipe.”