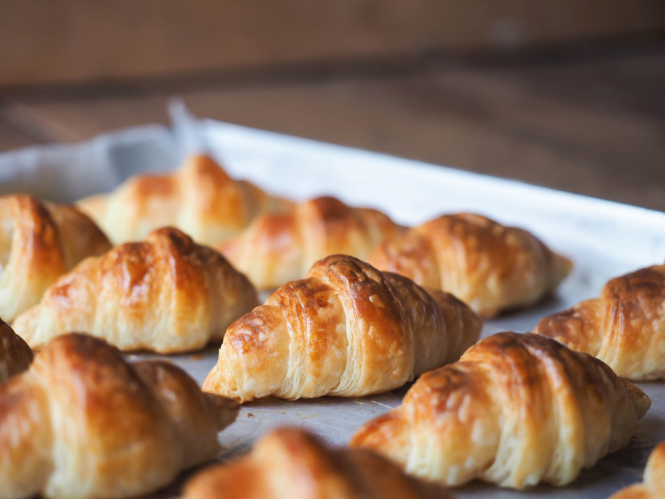 A young French baker who started creating artistic and colorful pastries at home during the first lockdown has found success online and in his neighborhood, selling out his entire stock in less than 30 minutes.

Maxence Lelait, 22, from Montreuil, Seine-Saint-Denis, started creating the vibrant viennoiserie in his kitchen, with music blaring.

Mr Lelait learned to cook and bake at the famous Ferrandi School in Paris, but his real passion for making creative pastries developed during the first Covid lockdown in 2020. He previously made hamburger buns at the neighboring restaurant Avec Amour – Le Burger.

Mr. Lelait’s boss, Antonin, bought him a rolling machine to help him make more precise pastries. He practiced for a year before the restaurant said he would be happy to sell his creations on weekends.

And the baked goods were a hit, drawing crowds and long lines. He told HuffPost, “One weekend I broke a record and sold everything in 24 minutes.”

Challenge Everyone had one and that was a hell of a lot pic.twitter.com/ZK0ubF6m1D

He joked: “[During lockdown] there was nothing to do, so I started making pastries with my rolling pin and my Carrefour butter.

My most beautiful croissant, it deserves to break the scores pic.twitter.com/bZsQmv4wIk

It uses natural dyes to achieve an artistic, multi-colored look. These include cocoa, charcoal and beets.

He said, “I like to innovate without compromising core products. That’s why I focused on pain au chocolat and croissants. I don’t want to lose myself by making things that are too far from the natural product.

Here are the results you already know. And above all, you can see all the work that has been done over several years to achieve this result. I am happy with it and I would do everything to allow others to achieve these results and restore our image. pic.twitter.com/Afv48C7AH0

He said: “It made my job more interesting than just making hamburger buns… Antonin really helped me so that I didn’t feel lost in a big establishment. »

The Baker said social media had “changed everything”. He said: “Before, I didn’t sell any at all, but the visibility on social media has changed that.”

Last March, he posted a photo of his “prettiest croissant,” and the post went viral. He said, “It was crazy. Likes and retweets came from everywhere. He now has over 50,000 followers on Instagram and Twitter.

It always fascinates me so much what you can do with flour, water and butter pic.twitter.com/WwWlGDB9Ul

The young baker has now left Montreuil and settled in the west of France, so his beautiful pastries are no longer on sale at the restaurant.

He now works at the two-star restaurant La Marine in Noirmoutier. He said, “I’m ready for a new adventure that will surely be full of a lot of new stuff.”

Of his pastries, he says: “I haven’t left the [baking] occupation; maybe I will come back one day!

“A beautiful shine”, “a honeycombed crumb”: the best baguette in France unveiled