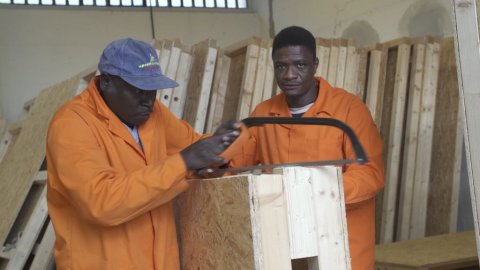 About 42% of refugees settled in France manage to find a job within one year of obtaining official status. But the jobs they find are often well below their skill levels, resulting in “downgrading” leading to dissatisfaction and burnout.

More than 24,000 official protection statuses were granted in France by the Office for the Protection of Refugees and Stateless Persons (Ofpra) and the National Court of Asylum Law (CNDA) in 2020. For a majority of the refugees concerned, this means the start of the next step. in their life in exile: the job search.

During their first year of legal status, nearly 42% of these refugees found a job, including one in four who managed to sign an indefinite contract, according to a new study published by the French Institute of International Relations. (Ifri).

This figure may seem encouraging, but only at first glance. The report, which is based on data from the ELIPA 2 survey conducted by the French Ministry of the Interior, also indicates that the working conditions of refugees in France are “precarious, unstable and unsatisfactory”.

Most of the accepted refugees report undergoing “downgrading”, which they say makes it very difficult, if not impossible, to continue the career paths they started in their country of origin.

“Highly qualified executives are becoming grassroots workers in France, while former bosses become employees,” explains Sophie Bilong, one of the authors of the study and consultant for the Immigration and Immigration Observatory. asylum of Ifri.

The report states that while 10% of accepted refugees worked in professions with a university education in their country of origin, only 2% continue to do so once their status has been granted.

Finding a job “in a hurry”

The reasons for this professional downgrading are multiple, according to Bilong. The main reason is “the period during which they are applying for asylum”.

“This should be a very important time to prepare for a project, get training and be ready to start working once their status is recognized,” she says. Under present conditions, however, everything must be done in a hurry. When an asylum seeker is granted protection, he must immediately find a job to support himself. Unfortunately, you can’t find a skilled job overnight, she adds.

As a result, most refugees are forced to turn to sectors that require few prerequisites, and which may seem to be their only option for earning a living in a tight labor market. “The hotel and catering industry employs nearly half of the refugees (45%), while the construction sector employs 21%,” the study said.

Another cause of this downgrading is the lack of resources available to asylum seekers when it comes to the labor market: “The companies we interviewed all told us the same thing, namely that (talk about the ) language is their first requirement, ”says Bilong. . However, while waiting for their status to be recognized, applicants in France do not have real opportunities to follow language training.

According to Bilong, there is also “a whole part of the labor market, which is totally closed to refugees, but it would greatly benefit from opening up to these candidates”. These are jobs that require French nationality or a diploma from a French university.

In 2011, 5.3 million jobs were closed to foreigners outside the European Union, including 4.5 million opportunities in the public service, according to the Observatory of Inequalities. This represents 21% of all jobs in France.

For accepted refugees, it is also impossible to fill a position of lawyer, accountant, pharmacist or notary. Without a French diploma, they do not even have the right to become hairdressers or to work in a nursery.

In recent years, dedicated public initiatives to change public perceptions of refugees have nevertheless been launched, such as the HOPE program. Set up by the French State in 2017, this initiative allows participants to learn French and a work-study job, while benefiting from administrative, social and medical support.

The mobilization of the private sector to help welcome asylum seekers is, on the other hand, “more recent” and “generally dates back to the migration crisis of 2015”, indicates the Ifri study.

“That year, there was an awareness of citizens who were also employees, and this had repercussions on many companies,” Bilong explains. “People have launched initiatives to deal with this emergency, and today these have become more permanent.”

New means have been put in place, including skills sponsorship, which makes it possible to organize a mentoring program between a refugee and an employee.

But the prejudices against the employment of refugees are still difficult to break. According to Alain Masson, director of the French catering company Sodexo, “stereotypes are still very strong, even in a large company that promotes social responsibility”.

The last option for refugees is to turn to entrepreneurship. This is the choice of 1.7 million foreigners, who came to France from outside Europe, indicates a study by the Startup Migrant initiative: “It’s a wonderful fact, because entrepreneurship is often a sign of autonomy and success, “Bilong said.

But before setting up and making a living from a business, refugees face many challenges, one of the major challenges being the ability to secure finance.

Some refugees find that there are simply too many obstacles in the way of employment and they give up. According to Ifri, 22% are unemployed, marking a “sharp increase” compared to their situation in their country of origin; almost 19% are inactive.

For both public and private companies, integrating a refugee is always a winning bet: a report from Deloitte shows that more diverse teams are on average 20% more innovative, while 87% of them say they make better decisions.

Best dishes to try in Bangkok this weekend: holiday highlights