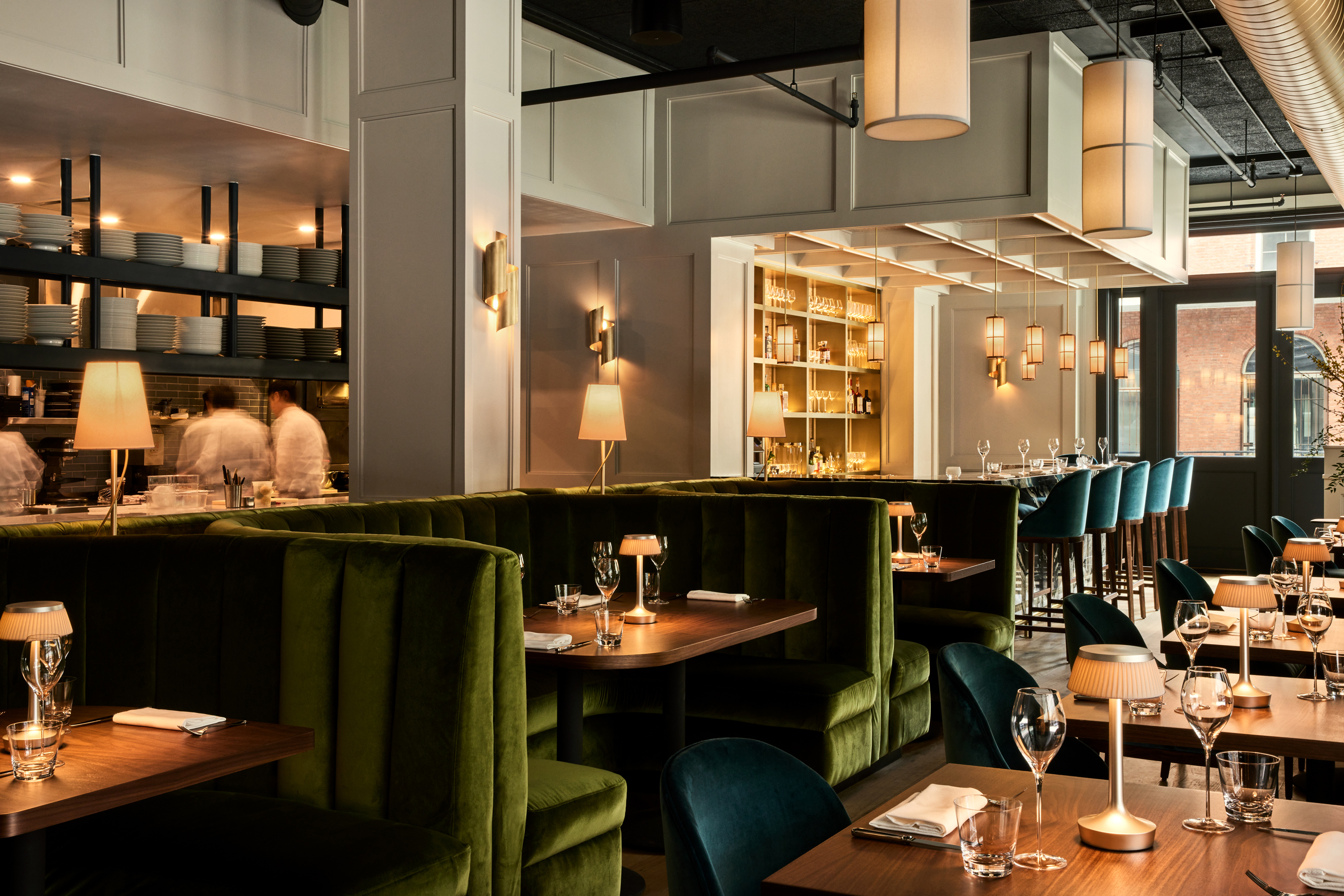 Chef Mitsunobu Nagae’s culinary education began when he was a teenager in Osaka, making bento boxes for himself and his sister while his parents worked long hours away from home. His discovery of a documentary about chef Joël Robuchon inspired him to enroll in a cooking school, and before long he was working for Robuchon himself in Paris, Tokyo and New York. In March, he opened his own restaurant, l’Abeille, with co-owner Rahul Saito, in New York.

L’Abeille, which seats 54 people and serves a $185 six-course prix-fixe menu in Manhattan’s Tribeca neighborhood, operates midway between French fine dining and the bistro cuisine known as bistronomy. . Inspired by the Parisian restaurant Le Comptoir, Nagae seeks to make haute cuisine more accessible. While Nagae has spent most of his career working in Michelin-starred destination restaurants, his and Saito’s vision for the Bee is more modest: a neighborhood restaurant cultivating loyal customers, equally suited to special occasions than at impromptu meals.

“The idea is to offer all the elements of fine dining at a much more affordable price – but still of very high quality – and a bit more laid back or, for lack of a better word, less stuffy,” Saito said.

L’Abeille also offers an extensive wine list, including a $115 deal with the tasting menu, and serves classic and signature cocktails designed to complement rather than overwhelm the food. A notable example is the Sterling Mason, named after the Bee building, in which banana-infused rum is mixed with espresso-muscovado syrup and coconut water (as well as ice cubes inscribed in such a way playful with the figure of a bee, the logo of the restaurant).

Traditional French cuisine is the starting point of l’Abeille’s menu, but Nagae deftly introduces ingredients and techniques from other cuisines. The reasoning behind its variations is generally two-fold: on the one hand, Nagae tries to use as many local products as possible, and so the availability of ingredients becomes a limiting factor; on the other hand, Nagae believes that diners in New York, compared to other cities in which he has worked, enjoy a higher level of dietary diversity.

A typical example is the squab dish which was on the tasting menu when it opened and is now available à la carte (every week one menu item is replaced with a new dish, so the menu is completely new every four at six weeks). Although pigeonneau is a traditional French dish, Nagae deliberately sourced his pigeons from California rather than France, as the meat was less gamey, and substituted the thick sauce made from liver and intestine that is normally required by a lighter miso sauce and a bourbon. Poblano mexican mole inflected sauce.

“It’s much more palatable to someone who isn’t familiar with that particular type of protein,” said Saito, translating for Nagae from Japanese. “He used his charcoal cooking techniques, adding miso to it. So it’s more appetizing. You bring a very traditional dish of French cuisine, but you make it more accessible, not only from a price point of view, but more from a taste point of view, and you offer it in such a way that a much larger crowd many can benefit from it. ”

Here as elsewhere, Robuchon’s influence on Nagae is palpable. Nagae recalls the intense attention Robuchon gave to each ingredient, embodied in his suggestion that a chef should use no more than three ingredients on a single plate.

“’Don’t complicate things too much. Don’t overcook it. Don’t overdress her. Let the ingredients shine. It’s something the chef always keeps in mind when preparing his dishes,” Saito interpreted for Nagae. “And the other thing is that, according to the chef, Mr. Robuchon was also extremely strict with himself. For example, the dressing: when you dress a plate – and often you see that a French dish is accompanied by a nice little herb on top of the fish or on the meat or on the sauce or on the mash – that, even that piece of leaf or a flower or whatever it is, if it’s not a fresh leaf or a fresh flower, if slightly tired it would not be accepted.This attention to detail is also something the chef has learned and has carried on since his Robuchon days.

The depth of Nagae’s culinary training allows her to bring an element of improvisation to the menu at L’Abeille. Following advice from Robuchon and other mentors, his thought process begins with the ingredients at hand rather than preset recipes.

“It’s absolutely essential that he can see the ingredients,” Saito interpreted for Nagae. “Each week he goes to several different farmers markets and so on just to go look at the ingredients and buy those ingredients at the market. Every chef buys from big companies where you have your ingredients delivered, but they also look at locally available products in the market and on the farm. And after getting its ingredients, the process of thinking about what to do with it begins. It’s not, ‘I’m going to cook this, so let’s find the ingredient.’ It’s more like, ‘Wow, that’s a great ingredient. What do I do with this? And that’s the funniest part for him.

Menu development is a collaborative endeavor, according to Nagae and Saito. L’Abeille’s head chef, Elijah Arizmendi, worked with Nagae at Shun in New York and had previously worked at the Robuchon restaurant in Las Vegas. The sous chef worked with Nagae at the Castle by Joël Robuchon in Tokyo, and line cooks have histories that include Thomas Keller’s gourmet restaurants Per Se in New York and The French Laundry in Yountville, California. All the kitchen staff contribute ideas as new recipes take shape, in what Saito calls a peer review process.

“These are the people who – the chef’s own word – are extremely ambitious,” Saito interpreted for Nagae. “And they’re full of energy, but [also] full of knowledge that they have accumulated in this relatively short period of time in different very high end restaurants and working under very skilled and talented chefs. So it’s a huge source of ideas that everyone throws around literally every day, whether it’s how to cook trout, how to design the plates, even simple things like the salad: how to deal with the different vegetables and how to put them together . . …Given the pedigree of the people we have, with their experience and professional knowledge, that’s a huge advantage.

One of Nagae’s goals is to help create a new generation of culinary talent. Whether they stay at l’Abeille or move on to run their own kitchens, Nagae’s team of chefs will be names to watch in the future.

Nagae moved to New York in 2017 to work at Joël Robuchon’s Atelier. When former Robuchon Alain Verzeroli opened Shun in 2019, Nagae joined the kitchen as head chef. Shun managed to earn a Michelin star before the pandemic forced him to shut down, leaving Nagae out of work. He considered returning to Japan, but Saito, a frequent patron of the Atelier and Shun, presented him with a different plan. Saito invited Nagae to cook a series of dinners for friends and family at his home, an arrangement that turned into a restaurant partnership over several lengthy discussions.

This is the first time that Nagae and Saito have owned a restaurant. Saito, who has worked primarily in finance, credits his business acumen and project management skills with helping him navigate the steep learning curve that running a restaurant entails. It also helps that Nagae is able to oversee the details of kitchen management while Saito takes care of it.

“Every person I know, every good friend I have — they’ve all said, ‘Have you lost your mind? when I said I was opening a restaurant. I look at it more from an analytical point of view. I try to see, why is it so difficult and what are the obstacles or what are the pitfalls? Saito said.

The restaurant also benefits from its experienced staff, according to Saito. The front desk clerks, most of whom previously worked at Joël Robuchon’s Atelier, not only convey, seemingly effortlessly, the sophistication that is Nagae and Saito’s goal for the Bee, but also help Saito learn the ins and outs. and out of catering.

“Building a culture, building the level of service, is not something you can do overnight,” Saito said.

Nagae and Saito agree that the Bee’s first priority is to curate the customer’s dining experience. While food is the star of the show, every detail matters to co-restaurateurs. In the decor, you can feel the back and forth between the brands of refined cuisine and the atmosphere of a relaxed neighborhood restaurant: the lighting is warm and discreet, but not dim; conversation at a low whisper, music tinkling slightly in the background. Tables have no tablecloths, and exposed piping along the ceiling harkens back to the building’s former days as a coffee and sugar factory. Admittedly, l’Abeille is more on the gastronomy side than a relaxed canteen, but it’s not stuffy.

The crockery deserves to be highlighted. Each dish on the tasting menu is served on a different platter, an indication of the influence Robuchon had on the plating on Nagae. The steak dish, for example, is served on a black plate with pearly highlights. Foie gras crème brûlée and onion ice cream are served in a ceramic egg that the waiter opens, revealing an equatorial “crack” in the “shell”. The strawberry, lychee, rose, and shiso cleanser is served in a near-toroidal bowl that makes the sorbet appear to sit at the center of a gravity well.

Saito and Nagae have yet to determine any fixed plans for the Bee’s future, as they focus on setting up and running the restaurant. For now, they are satisfied that, according to their own observation, people in the neighborhood are not just visiting the Bee but coming back for more.

“That’s the experience, and that’s the package: that’s what we’re trying to create,” Saito said. “And I think so far it’s working, because it’s elegant. It is little. All this brings a very cozy, exalted, elegant atmosphere [experience] with good food and nice environment.”

The 11 Best Breakfast Sandwiches To Eat In Philadelphia Right Now