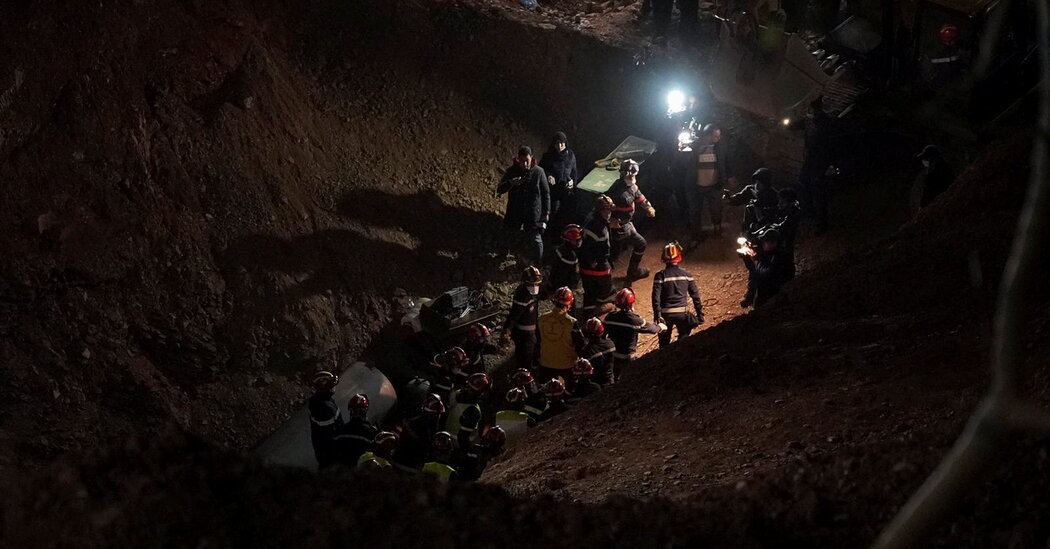 Effort to Save 5-Year-Old Transfixed in Morocco, Sadly Ending

CAIRO – The vigil lasted four days, transfixing tens of thousands of people around the world who watched, tweeted, clapped and prayed as a small group of rescuers in a small Moroccan village attempted to free a 5-year-old boy years from the deep well into which he had plunged.

On Saturday evening, the workers, who had dug a rescue tunnel, finally reached Rayan Oram, the boy. But the medical helicopter that had been waiting for days to take him to the hospital didn’t need to take off. He was dead.

United for days in hope, Moroccans and others in northwest Africa suddenly found themselves united in grief.

“I wanted to believe miracles are still happening,” said Mehdi Idrissi, 32, a doctor in the Moroccan city of Fez who has been following the rescue effort for days, doubting Rayan could survive his ordeal but said clinging to optimism. “As a country, we needed a little hope, and although the ending was tragic, it brought us all together. May he rest in peace.”

At times during the operation, more than 100,000 people were watching one of the live feeds which showed the trench where rescuers, working day and night, were digging by bulldozer and by hand. Thousands more followed on other live streams and social media, not only Moroccans but also Algerians, others from North Africa and people in France, where there is a large diaspora. Maghreb, the French-speaking region of North Africa.

On-site reporters occasionally burst into the livestream to thank viewers in English, French and Arabic for their support.

“I think every one of us, every Moroccan around the world, is awake, watching and praying that 5-year-old Rayan will be rescued and reunited with his parents,” Boutaina Azzabi Ezzaouia, Dutch-Moroccan digital producer in the Netherlands , wrote on Twitter.

For days, there seemed to be reason for hope: On Thursday, a camera that rescuers had lowered into the shaft appeared to show Rayan moving, if he was bloody. The workers were also able to send him oxygen and water.

But on Saturday afternoon, when rescuers dug a tunnel inches from where the boy was trapped, authorities remained silent about his condition. At one point, they said they couldn’t assess his condition because he was lying on his side in such a way that it was difficult to see him. Later, they refused to describe what they saw.

As the hours passed without any official word on Rayan’s status, it became harder to avoid the question of whether he was still alive.

All that was clear was that the diggers were still digging.

Initially, rescuers tried to pull him out of the 100ft shaft where he fell on Tuesday afternoon. But fearing that the well walls would collapse, they changed course. First they dug a trench beside the shaft, then they tunneled horizontally from the trench to the bottom of the shaft, changing course when they hit a solid rock barrier.

All Saturday afternoon it was rumored that the rescuers were close to breaking through – that they would get their hands on Rayan within two hours, or anytime – only for the tunnel to go on forever so they hit obstacles.

Around 9:30 p.m., cheers erupted around the well, where hundreds of onlookers and rescue workers had gathered over the week, some even sleeping under the trees while watching. Rayan was absent.

But rescuers huddled tightly around him as they carried him to an ambulance, making it impossible to tell whether he was alive or dead.

A few minutes later, the news spread: the King of Morocco, Mohammed VI, had called Rayan’s parents, Khaled Oram and Wassima Khersheesh, to offer them his condolences.

The King “confirmed that he had closely followed the development of this tragic accident, and had given instructions to all the authorities concerned to take the necessary measures and make the maximum effort to save the life of the deceased,” according to a statement from the royal court released on state-run media. “It was the will of Almighty God,” the statement concluded, that Rayan was dead.

Some who had undergone the operation burst into tears in public. Others took to social media, where they had gathered for days to encourage rescuers and share prayers for Rayan. Even many in Algeria, which despite close cultural and family ties to its Moroccan neighbors has been locked in a hostile diplomatic standoff with Morocco over the past year, have rallied behind the cause.

“We had all hoped that little Rayan would pull through,” Laila Lalami, a Pulitzer Prize and National Book Award-winning Moroccan novelist, said on Twitter after learning the boy had died. . “It’s all so tragic.”

Video from the scene had shown rescuers manually drilling sideways towards Rayan, their work illuminated by headlamps, as prayers and cheers erupted from onlookers gathered above the ground.

The village of Ighrane, about 60 miles from the blue-walled city of Chefchaouen in northern Morocco, had been sleepless for four nights as rescue efforts continued. As spectators gathered at the well, Rayan’s family prepared couscous, the traditional Moroccan dish, and served it to the crowd. Others distributed bread and dates.

Rayan’s father told reporters that he was fixing the well, which he owns, when Rayan fell into it, but at first he didn’t realize where the boy had gone. His mother said the family searched the area when they noticed he was gone, not initially suspecting he had fallen into the well.

The family first searched the area. Then the neighbors. Then civilian rescuers, topographers, members of the Royal Gendarmerie or even volunteers from a local mountaineering and caving society.

“I have no words,” wrote a Twitter user named Deej as rescuers finally pulled Rayan out of the pit, adding a series of heart emojis. “He…he…he went out.

Heathrow and Gatwick: Beautiful French village 4 hours from London consistently named among the best for a romantic getaway