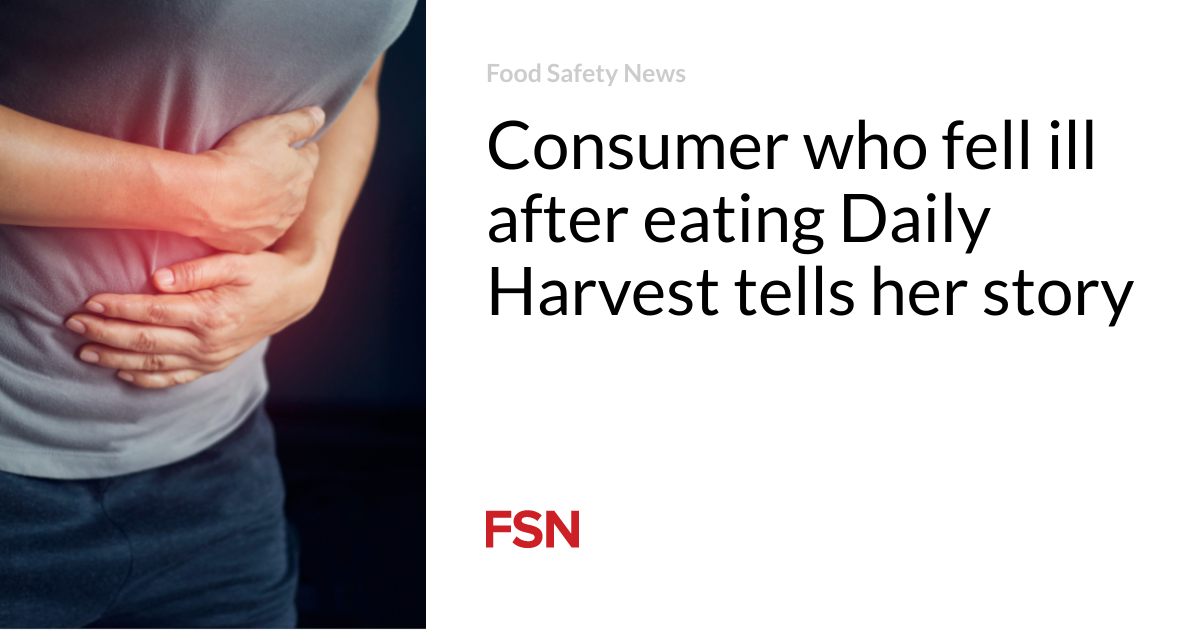 Sarah Schacht is one of a select group of people who have the distinction of having contracted E. coli during two separate outbreaks. First victim of the epidemic of E. coli Jack in the Box from Seattle in 1993 at the age of 13, Schacht was ill again 20 years later after dining at an Ethiopian restaurant in Seattle linked to an outbreak of E. coli in February 2013.

And now, nearly another decade later, Schacht may be part of another foodborne disease epidemic.

“The funny thing is that the average for Americans is that they’re in for a foodborne illness outbreak every 10 years. So the good news is I had a decade off,” Schacht said. Food Safety News.

Harvest, a food delivery service, released a statement on June 19 recalling its “French Lentil + Leek Strikes” after receiving customer reports of the products causing gastrointestinal issues. There has been an increasing number of consumers reporting illness after eating the product in recent weeks.

“I don’t miss the irony of being caught up in all of this with Daily Harvest. I want to be careful saying this, I’m still awaiting my lab tests. I’m still awaiting the Daily Harvest product tests. But I suspect, based on what I’ve heard from others, that I might be in this outbreak,” Schacht said. “No one with this outbreak knows anything for sure at this time. was useful for this.

The Seattle native has been using the Daily Harvest catering service for several months. She began feeling unwell during May, experiencing two separate nights a week or two apart from severe gastrointestinal symptoms. His stomach was swollen and inflamed. “I would always carry on with life as best I could. And then I would have, like, these random food events. They were really painful. There was one night I was traveling for work and realized that maybe I should go to the ER, the pain was so bad. It was scary to be woken up in so much pain.

Over the holiday weekend, Schucht received an email from Daily Harvest saying they were recalling “french Lentil + Leek Crumbles”.

“I immediately emailed them and said, have you identified the pathogen or the cause of the disease? And I got an automatic response. It was the exact same email that had been sent to me before.

Schucht threw the bags. “I opened up my compost and threw the bags in the trash.” But Friday night, before she got the email, she drank a Daily Harvest smoothie. “I was like, I haven’t had enough protein for the day. I’ll, like, have a protein smoothie for dessert. So I grabbed one of their prepackaged smoothies and added some protein powder. protein and mixed it up and was violently ill the next day.

“And I suspect, and I can’t be sure, it’s my instinct, not to make a pun of it, that from all these other complaints online, maybe it’s not just about only one product.but i can’t prove it.it’s just my suspicion.

“When you order products from Daily Harvest, it’s kind of like you set it and forget it and they just keep shipping to you on a regular basis,” Schacht explained. “You live your busy life and eat from that stockpile of food in your freezer. I think I ate more than two bags of it (the French lentils + the leek crumbles). Probably a little more. The bags are like the volume of two to three individual bags of crisps.”

Schucht remembers being excited that about a month or two ago Daily Harvest released two products called crumbles – a vegetarian protein product that can be added to your daily meals. “I’m a vegetarian, I’ve been a vegetarian most of my life. So it was pretty compelling to have an extra protein element to put with my meals.

“I think I was one of the first to order it when it was available. Because I just thought, oh, that sounds good to add to my meals.

She tried different ways to cook the crumbles, but found that they never seemed to turn out as advertised. “It’s kind of like finely ground nuts and lentils, then some spices and maybe some onion or a bit of mixed vegetables. All of this is finely ground and has a somewhat moist texture. It is crumbly, but also moist. I was not a big fan of it, but I had already ordered it twice.

“I pan-fried it. I also microwaved it – which I’ve done for almost every product I’ve ever had from Daily Harvest. They were like, you can cook in many ways. It never occurred to me that they would send this item without the ingredients already cooked. I was under the impression that it had undergone some sort of cooking or pasteurization process beforehand .

Schacht is waiting for more tests to come back, both to see what caused the illness and what might be in the product. “I sent in the leftover product I had. I hadn’t realized it, but deep in the back of my fridge I had an open bag and a sealed bag of crumbs that I had missed when I had emptied three other bags.

Schacht is slowly recovering from these bouts of illness. About a decade ago, she began to develop reactive arthritis responses from the second of two outbreaks of E. coli in which it has been implicated.

“It’s an inflammatory response to everything my gut has been through, so I’ve been in a lot of physical pain. I’ve worked so hard over the past decade to reduce inflammation. And the diet played a part. a big part in that, along with lots of physical therapy to help manage and reduce the inflammation.And now I’m seeing signs of reactive arthritis coming back.Which has been really uncomfortable.

“The last two years, I have been well placed. I worked hard to be healthier. I thought I was doing something that supported my body – given my time constraints with work and life – by getting a product like Daily Harvest.

“For people in the food safety world who may be reading this interview, I should say, ‘Hey, I’m double-checking the products I received. And they were all completely frozen. Like rock hard. I was not concerned about the deterioration.

She noted that except for the smoothie, she steamed the food.

“It’s been about a month and a half, you know, my doctor and I are trying to figure out what’s going on with me and until the recall notice never put it together, that this might be what was causing me discomfort.”

The Quesoff Wants You, Garbo’s Grabs Another Brick-and-Mortar, Local Foods Debuts Downtown, Lazarus Revamps the Former Coldtowne Theatre, and Ooooh, That Bourbon Brawl: All the news that will thrill your taste buds