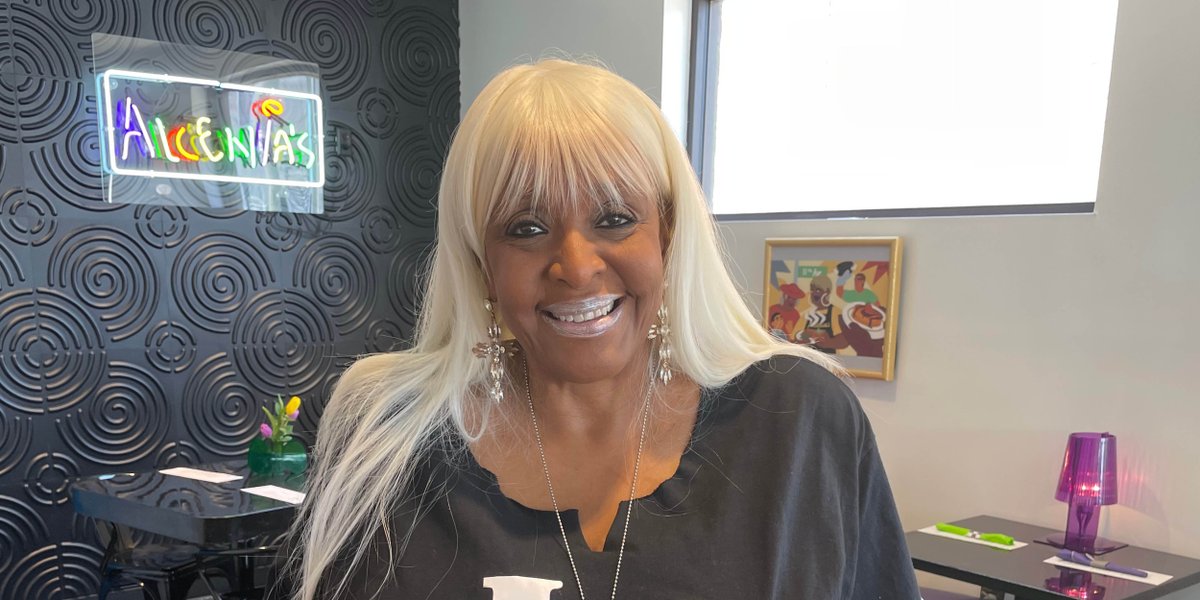 from Alcenia is now open after being closed for 390 days for renovations. Owner Betty Joyce “BJ” Chester-Tamayo purchased the downtown building on Dec. 2, 2020. “Renovations began March 19, 2021,” she says. “From the roof to the ground, everything is new.”

And, she adds, “Even my mother’s portrait is brand new,” painted by Memphis artist Larry Walker. She is an important part of the restaurant, as her mother is the late Alcenia Clark Chester, the establishment’s namesake.

“Alcenia is a blessing from God,” says Chester-Tamayo. “I am there, amazed. People ask me, “Do you have an interior designer?” Yes. Me and God.

Along with all other items, customers can order Chester-Tamayo’s signature fried chicken. “It’s a soul food restaurant,” she says. “You can’t eat soul food without fried chicken.”

When asked where she got her recipe for this popular item, she replied, “Mine is from my mom. And his came from her mother.”

Chester-Tamayo didn’t cook growing up. She started when she was 19, after getting married and moving to Germany, where her ex-husband was stationed. She first tried other things. “I remember cooking a dish with rice and mayonnaise and it was terrible.” Her ex-husband asked her, “Where does this come from?” “I said, ‘You like mayonnaise and you like rice.'” He replied, “Not together.”

“This recipe does not come from my mother,” she explains. “This is from Betty Crocker’s cookbook.”

As for the fried chicken, Chester-Tamayo says, “My mom just used salt and pepper and that was it. I don’t know how she was able to make the food taste like it did with just salt and pepper. But what accompanies fried chicken is having the right temperature and not cooking it too quickly. This is what makes your fried chicken juicy.

“Alcenia is a blessing from God. I am here with astonishment. People ask me, “Do you have an interior designer?” Yes. Me and God. —BJ Chester-Tamayo

And, she says, “My mom used those black cast-iron skillets.” His mother also only had “high-end” ingredients in her kitchen.

Frying the chicken was easy, but preparing it was not, recalls Chester-Tamayo. “I’ve never been able to carve a chicken either. My mother never bought chicken parts, but sliced ​​the whole chicken and cut it perfectly.

Once cut, wash the chicken in plain water, she says. And then pat the chicken dry with paper towel.

Her mother added salt and pepper to the flour-based batter. “You can use [flour], but you have to put baking soda. She used the plain. I love self-elevation [flour].”

Another family technique: His mother never covered the pan with a lid because it makes the chicken soggy, says Chester-Tamayo, noting that it takes about 20 minutes to cook. “You want to cook it all the way. You don’t want anything raw. Once the fat is hot, you cut it [the temperature] down.”

Chester-Tamayo prefers a fryer in the restaurant instead of a frying pan. “It’s best to cook on the stove in a cast iron skillet, but mine is good deep fried. You have too much chicken in a restaurant to try to cook it on the stove.

As for sides, fried chicken “goes with everything – mac and cheese, greens, lima beans, mashed potatoes and gravy, and green beans.”

Chester-Tamayo doesn’t believe fried chicken goes with fries, though. His mother never served it with fries, and neither did she, she says.

“Here’s another thing with fried chicken,” she said. “If I fry it at a restaurant and bring it home, I won’t heat it in the microwave. It makes him soggy. If you put it in the oven, it will get crispy like before. Set the oven to 335 and heat it up.

from Alcenia is at 317 North Main Street.