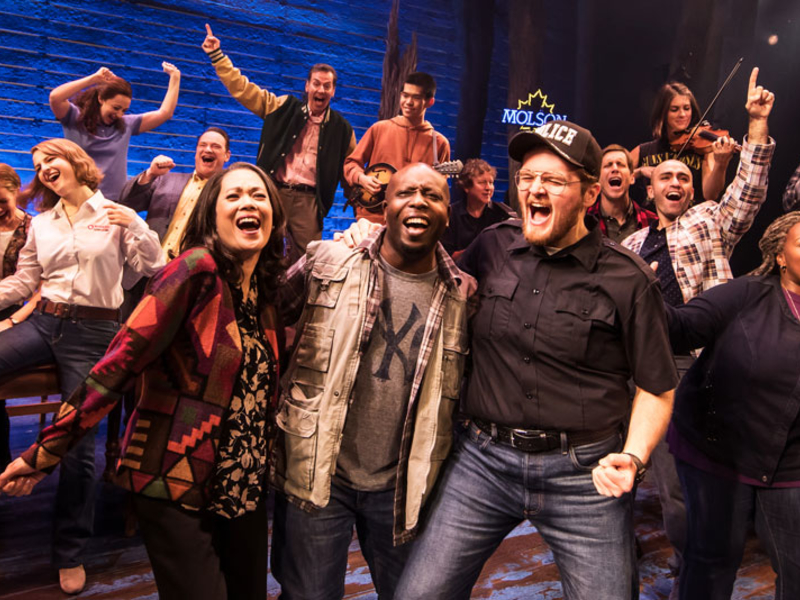 “Oklahoma!” is not a series known for its self-awareness or its dark side. The Daniel Fish production, touring here for two weeks, is less evasive and turns down the Technicolor of the 1955 film and countless high school productions, placing him more in the world with audiences and actors. The public lights come on brightly. “Offstage” actors sit and watch when they are not on stage. “You get that feeling of presence,” says Sasha Hutchings, who plays Laurey. “Nothing matters except who is in the room. The obscurity of the production comes from within the show as Rodgers and Hammerstein created it – there’s the familiar sunshine from “Oh, What a Beautiful Mornin ‘” and “The Surrey With the Fringe on Top” , but there’s also “Pore Jud Is Daid,” in which our hero suggests his romantic rival kill himself. “I think that adds depth,” Hutchings says. “I think you just get the full picture. things we struggle with every day. “This” Oklahoma! “you might say, resides in a whole different state CIBC Theater, Jan. 11-23.

A History of the New York Times of October entitled “Who is the bad friend of art?” Sparked a debate about water fountains, digital and literal, about the responsibilities of fiction writers to their actual sources, and when inspiration crosses the line of theft or defamation. The Redtwist Theater reminds us that playwright Donald Margulies explored these thorny terrains in his 1996 finalist play Pulitzer “Stories collected“, a two-part story about a short story writer who frames a young fan, who writes a novel based on the older writer’s affair with a poet. Fittingly, the play was inspired by an actual feud between a novelist and an autobiographer who claimed her own life had been fictionalized.Life mimics art mimics life, et cetera, and around it twists.Redtwist Theater.January 6 to February 13.

In addition to the Happier Against No Aging anthem he created in “Peter Pan,” JM Barrie wrote a more spooky play titled “Marie Rose,” where the main character disappears twice on a mysterious Scottish island – for many years the second time around – and reappears, ageless since the day she disappeared. Black Button Eyes Productions, a company dedicated to shows where magic appears in reality as a returning Mary Rose, adapted the show into a musical, developed during the pandemic by Ed Rutherford, who is the artistic director of Black Button, and Jeff Bouthiette. “We’re aiming for a weird, supernatural, supernatural feel,” says Rutherford, comparing the classical musical style to “The Secret Garden,” accompanied by a four-piece group of violin, cello, percussion and keyboard. Mary is rising in musical form for the world premiere this weekend. Black Button Eyes Productions at the Edge Theater. January 7-February 12.

Young recorder Tabea Debus plays from his album “Ohrwurm”, the German word for a tune that gets stuck in your head (which translates to “Wrath of Khan” -like “earworm”). 7:30 p.m., January 7. Logan Center Performance Hall, University of Chicago.

For George Gershwin and Maurice Ravel, the Chicago Symphony Orchestra combines the greatest hits with a second work – “Rhapsody in Blue” and a suite “Porgy and Bess”, and “Bolero” and the Piano Concerto in G major. Inon Barnatan solos in piano display cases. January 6-8. Symphonic Center.

“Moors, “ a postmodern and absurd rhapsody evoking the life of the Brontë sisters. A red orchid theater. January 6-Feb. 27.

“The Virginian: a rider of the plains, “ an adaptation of the same archetypal cowboy novel that inspired the long-running western television series. Illuminated city theater. Jan 7-Feb 20.

After an early pandemic strategy of take-out and casual dining on the terrace, Robert and Son, a French restaurant in the Center-Nord region, launched in November in a fancification to a special occasion destination with a tasting menu at $ 205. Friday and Saturday only. (See other notable restaurant openings here.)

In addition to the 50/50 series, the Gene Siskel Film Center thrills Pedro!, a six-week paseo through the films of Pedro Almodóvar, starting this week with “Women on the verge of nervous breakdown”. Jan 5 Feb 5 12.

On Wednesday, we wear yellow, says the Music box theater, screening of a giallo – the Italian cinematic version of a cheap paperback – once a week at 7.15 p.m. January Giallo kicks off on January 5 with “Trauma,” by Dario Argento, director of the original “Suspiria”. January 5-26.

Neapolitan crib, the elaborate 18th century crib on the annual holiday exhibition. Chicago Institute of the Arts. Until January 9.

Renovations underway at the new “Jersey Mike’s” location in Bangor