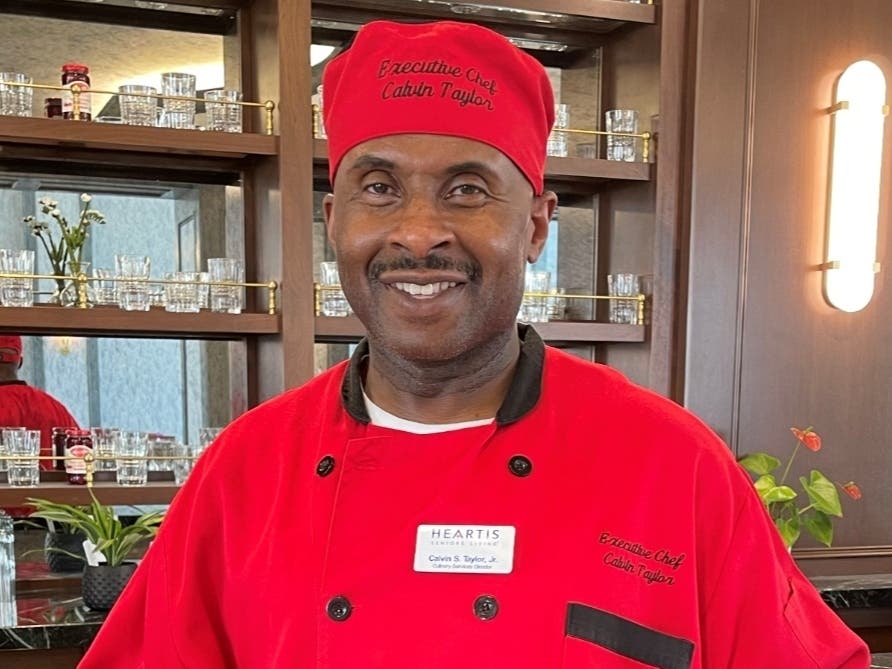 YARDLEY, PA – Calvin Taylor was hired to be Executive Chef at Heartis Yardley Senior Living in October, and has baked French Bread, Coffee Cake and Pumpkin Bread for potential residents to try before opening of the community in April.

Taylor had big plans for this job. In his kitchen, 80 percent of meals are cooked from scratch – a number he hopes to increase even more – and Integral Senior Living has given him carte blanche to design the entire community menu. But he also arrived with higher and higher goals for resident comfort, which he had developed throughout his nearly 40-year career in food.

At 16, Taylor worked as a dishwasher at a Philadelphia nursing home, eventually getting a job as a waiter, then a dining room supervisor, then a chef. He said other chefs and cooks at the restaurant showed him the ropes: how to keep his uniform presentable, how to make a nice plate, and more. (It was also there that he met his wife, Jennifer, who worked as a social worker and later as a registered nurse).

At the age of 20, he decided to attend Restaurant School at Walnut Hill College – and in his sophomore year he traveled to France to learn more about their culinary scene.

â€œI was so glad I went, because it’s a difference in the way the servers present their food,â€ he said. “They took him seriously.”

While working for his associate degree, he did an internship at a hotel. Then, after graduating, he became the general manager of the retirement home, worked at the Frog Commissary catering company and worked at Olive Garden. During his first month at Olive Garden, he was Employee of the Month – a distinction he attributes to the teachings and sensitivity of his mentors.

Before long, Taylor would be a mentor himself, working as a chef at various nursing homes in the area.

â€œI have developed things that I think would satisfy older people,â€ he said. But many communities were frozen in their ways and were unwilling to work with him to implement his ideas.

This is not the case in Taylor’s new position. He was able to create the menu, directly meet the needs and wants of residents alongside cook Aaron Jackson, and try something he was dying to make: personalized meals.

Serving over 80 residents, he can’t do exactly what they want every night. But when new people move in, he takes the time to meet them, ask them when their birthday is, and ask for their favorite dessert. The same day, he wishes them a happy birthday on the menu and prepares the dessert he has chosen to celebrate.

â€œI’m happy because I can see the smiles on their faces for something I’ve wanted to do for so long,â€ he said. “And I knew the answer would be this.”

Working in a retirement home also presents its own challenges, but Taylor is always ready to deliver what residents want. For a community member who can only eat a small amount of salt a day – but tried a piece of his wife’s crab cakes and loved them – Taylor made her own special crab cakes, with all of them. kinds of herbs and spices so that they taste the same good. Now he can ask when he wants.

When Taylor’s potato pancakes didn’t come out quite right, a resident gave him his son’s recipe and asked if he would like to try it on the menu. Now the menu says “Jack Haberman’s Potato Pancakes” and Taylor says the residents are thrilled.

Taylor is dedicated to his work and the community members who eat his food. But he also loves baseball and the four Philadelphia sports teams, and he’s a musician in his spare time who has released three R&B records.

He and his wife are also parents of a son who is now 16 years old.

â€œWithout them I don’t think I would be who I am today,â€ he said, adding: â€œMy wife is my heroâ€.

Stay up to date with what’s happening in Yardley or in your area. Sign up for Patch emails and don’t miss a minute of local and national news.

Have any tips, story ideas or questions about Lower Bucks County? Send an email to [email protected]

Did you thank a school bus driver? – The gallery

Fantastic things to do in Albany

Eat & Run: You don’t need a beer in hand to have lunch at…