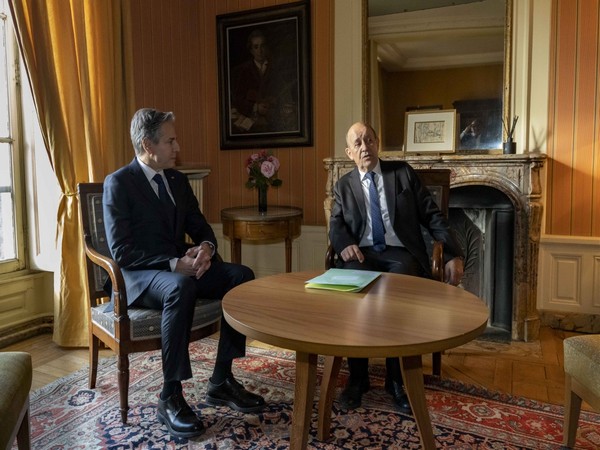 Paris [France]May 16 (ANI): Ahead of the US-EU Trade and Technology Council (TTC) ministerial meeting, US Secretary of State Antony Blinken met with his French counterpart Jean-Yves Le Drian in Paris-Saclay on Sunday, in France, where the two leaders stressed the need to “cope” with global food insecurity resulting from the war in Ukraine.
They also discussed efforts for a mutual return to full implementation of the Iran nuclear deal.
“The two men discussed important issues in the bilateral relationship, in particular the urgent need to address global food insecurity exacerbated by Russia’s unjust and unprovoked invasion of Ukraine,” a statement said. US State Department press.

Secretary Blinken highlighted the Call to Action for Global Food Security, which will take place at United Nations Headquarters in New York on May 18.
The two leaders also discussed efforts to achieve a mutual return to full implementation of the Joint Comprehensive Plan of Action (JCPOA) with Iran.
Blinken, joined by U.S. Trade Representative Katherine Tai and Commerce Secretary Gina Raimondo, will participate in the second U.S.-EU Trade and Technology Council (TTC) Ministerial Meeting.
According to the US State Department press release, they will meet with EU leaders to discuss how democratic approaches to trade, technology and innovation can serve as a force for greater prosperity.
The U.S. Secretary of State, joined by Under Secretary for Economic Growth, Energy, and the Environment Jose Fernandez, will also meet with business and civil society stakeholders to hear their views on the past and future work of the TTC. (ANI)