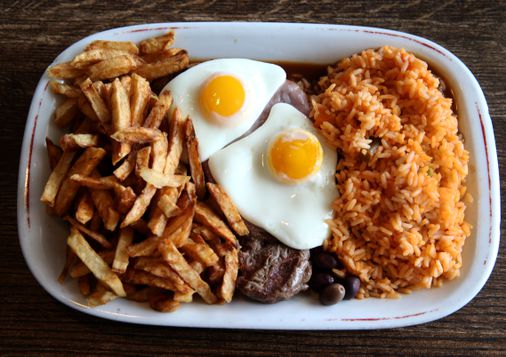 She also told me about her childhood in Freetown, where she grew up in a Portuguese and Italian family, and some of her favorite restaurants in the south coast region. “I still mourn the loss – it’s been decades – of China Royal in Fall River, where I ate my first grain of rice as my first solid food,” she said. But above all, it was the Portuguese cuisine concentrated in the communities of Fall River and New Bedford that had its heart. She started ticking off the places she likes, then dropped what she promised During a very long time to take chef Jason Santos on a culinary exploration through some of them.

Get the Big Task

Your guide to staying entertained, from live shows and outdoor entertainment to what’s new in museums, movies, TV, books, restaurants and more.

My ears perked up. I’m still looking for a guide with the inside scoop. Let’s make this thing happen.

So, on a hot sunny day, our motley crew gathers on the terrace of Tia Maria’s European Cafe. It is located in a pretty goldenrod house with white trim, in the New Bedford Whaling National Historic Park, an area full of charm and cobbled streets. In fact, he feels European. It’s open for breakfast and lunch, and dinner on weekends, with a tasty menu of soups, sandwiches and Portuguese classics: caldo verde, Mozambican prawns, steak topped with eggs. But the day is young and we have plenty to eat, so we start with a snack: egg custard tarts called pasteis de nata and grilled and buttered Portuguese rolls. Bruno wears a pretty flowery dress with ruffled sleeves, bubbling with excitement. Santos — behind local restaurants such as Buttermilk & Bourbon and Citrus & Salt and a frequent TV appearance on shows like “Bar Rescue” and “Hell’s Kitchen” — sports a gray shirt and drops deadpan one-liners, his characteristic blue hair shining in the sun. We need coffee, but Bruno has another idea.

“It’s Sumol!” She passes around cans of lightly carbonated fruit juice, available in flavors such as orange, pineapple and passion fruit. It’s fruity and sweet and iconic in Portugal. Bruno drank a ton of it as a kid (but for adults it would be great as a mixer with alcohol).

Then she looks furtively around her, before unpacking her backpack.

“Jackie, what is it?” Santos is already laughing as she looks at the plastic bag she proudly pulls out.

It’s a loaf of Portuguese sweet bread from Lou’s Bakery in Fall River, of course. Bruno has tried them all and Lou’s is the best, she says. The bakery opens at 6 a.m. Thursday through Sunday. Today is Monday. Then comes the confession: she tried to convince them to open today, just for us. They were indifferent. So we can’t try their famous malassadas – Portuguese donuts – which must be tasted fresh. But we can at least taste their sweet bread, which she picked up while she was there. Even one day, she is convinced, it will always be the best version in town.

We taste it. It’s awesome – soft, sweet, with just the right density, made with flour, butter, milk, eggs, yeast, sugar and salt. No preservatives, because you’ll eat it all before it goes stale, or use the scarce leftovers to make great French toast.

But it’s time to move on, before cutting our appetites with contraband sweet bread. Next stop: Goulart Square Bakery, a grocery store with decorated windows and a sign promising breads, pastries and cakes. Like Lou’s, it’s been around for over 40 years and produces papo secos, Portuguese bread rolls; bolos de arroz, rice muffins; and other sweets. By the time we arrive, the stock is already running low. “How are they?” Santos asks, pointing to something in the briefcase. The serving staff member shrugs, refreshingly honest. We are a bit late in the day for fresh produce.

The natas, however, look amazing, flaky and puffy and caramelized in spots. I love cream pies, which the Portuguese colonizers spread everywhere. We leave with a bag in hand, to eat after lunch at Antonio’s Restaurant.

Bruno is a long-time customer, and owner Belinda Afonso spots her, giving us a warm greeting. Should we look at the menu? Probably not, although we still do it for fun. We already know that we are going to order pasteis de bacalhau, crispy fried salt cod and potato croquettes; ginormous stuffed quahogs, which taste like chouriço-flavored Thanksgiving stuffing (in these parts, you can get the pork sausage in just about anything); Alentejana pork, pan-fried filet mignon with garlic, necks and sautéed potatoes; and a small, light dish called steak Antonio’s way, grilled sirloin topped with ham, fried eggs and beef gravy, alongside rice and fries. Friends, we are satisfied. But that doesn’t stop me from enjoying my favorite dish from the local Portuguese cannon, the Mozambican prawns, a spicy orange-stained buttery concoction with saffron and a spice blend containing annatto and turmeric. The prawns are beautiful but almost incidental; to me this dish is all about the sauce. This would be such a great hangover cure, it almost makes me want to be hungover.

We can’t eat another bite, but we can shop. Bruno takes us to Portugalia Marketplace in Fall River, which she aptly calls “Eataly, but for Portugal”. It is a vast and impressive collection of treasures, with a counter for cold cuts and all cold cuts (spicy and mild chouriço, linguiça, morcela), another for breads, a separate room presenting many kinds of salted cod, and shelves that hold all sorts of nuts, olives, canned fish and wine that one could want to buy. It is not just a market but a showcase of Portuguese culinary tradition. Naturally, there is a cafe.

Can we eat one more pastel de nata, drink one more coffee? Still.