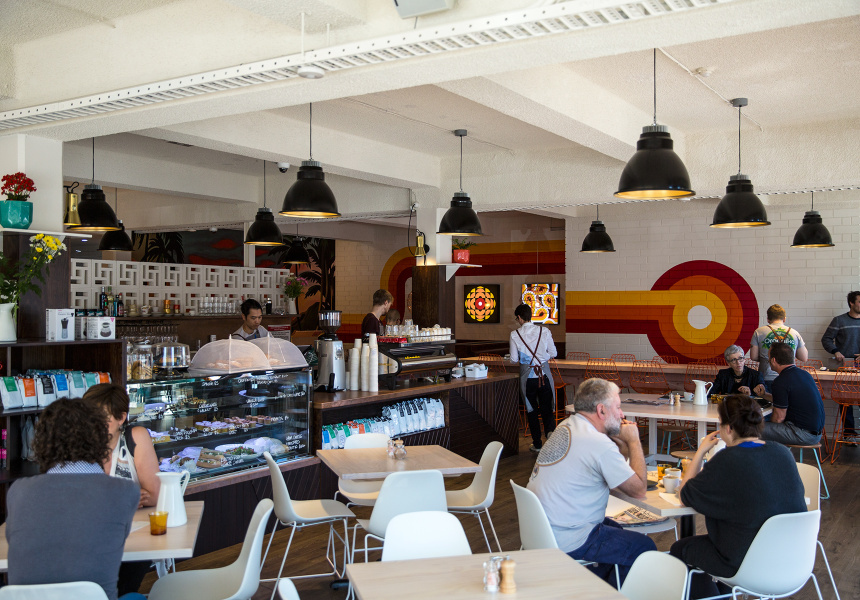 When it came time for Emily Raven to name her final venue, she knew it had to make a similar impression to her predecessor, My kingdom for a horse (named after a verse by Shakespeare Richard III). “Apart from the big bull’s eye [painting] on the wall, what people talk about the most is the name,” she says of her cafe and rotisserie on Wright Street. “But Shakespeare is pretty dark, and we don’t need more of it right now. I needed something lighter.

So she turned to playwright Tennessee Williams and landed on A Prayer for the Wild at Heart, a line from his play Stairs to the roof. The name is also an ode to hotel workers. “The savages at heart are the misfits who struggle with conformity and daily routine,” Raven explains. “They are passionate creatives, artists, musicians, and most importantly to me, many people who work in the hospitality industry.”

A Prayer for the Wild at Heart, the place, will be a French-inspired brasserie, which will open next month at the foot of a building on Hurtle Square. It’s a bit of a loophole for Raven, who opened Café 54, her French bistro, 25 years ago. (When she closed it seven years later, she took a job at Le Cordon Bleu before opening My Kingdom for a Horse in 2015, then her Waymouth Street Branch.)

The globe-trotting APFWH menu from Breton chef Stéphane Brizard (ex-Crafers and Cremorne Hotel) will feature brasserie classics like flat iron steak with café de Paris butter and a pithivier with beef cheeks and wild mushrooms as well as more varied dishes. such as ricotta and truffle gnudi, heirloom beetroot carpaccio, coconut and chilli chicken roll sambal, sweet potato and chickpea pastilla (a Moroccan pie), and a shoulder of lamb chermoula (to be shared between two or three) with a spicy yoghurt. Mains will be available for lunch and dinner, and there will be a small afternoon snack menu to pair with a cocktail or classic wine (the wine list will contain local and international drops that change regularly, as well as a small reserve of the collection.)

“I don’t want it to be a French restaurant, and it’s not,” Raven says. “We are definitely working with a lot of other flavors. It’s a recognizable cuisine… We have some brasserie classics interspersed with what most people would consider contemporary Aussie dishes.

The venue will also be open for breakfast, with a pared down menu of My Kingdom for a Horse coffee, pastries and eggs. (Kingdom is a 15-minute walk away, for those after a larger morning meal.)

For Raven, who both works and lives in the south end of the city, it’s a much-needed addition to the growing area. “I live on this side of town, and we have a few restaurants and a few good operators, but it’s a bit sparse,” she says. “We also have a lot of construction and a lot of new apartment buildings. In particular, on Hurtle Square there has been a lot of construction – in my opinion [A Prayer for the Wild at Heart] owner.”

Although in town, Raven wants to provide a neighborhood-style restaurant for these residents. The laid-back spot will overlook Hurtle Square, with half of its seats outside under a veranda to take advantage of the leafy surroundings. Inside, a bronze mirror bar will be illuminated to be visible from the outside at night. There is also an acoustic ceiling to dampen noise.

When Raven calls this place her “love letter to the hospitality industry,” it’s not just lip service. It also does the work to keep people in the industry – through a commitment to fair compensation; flexible work arrangements, including work-sharing roles to allow parents to return to the industry; and internships.

“It’s up to small businesses like mine to innovate, retain people and give them a future,” says Raven, who was appointed Small Employer of the Year at the Australian Training Awards in 2021. “You have an obligation to share your skills and try to put them to work in the industry rather than burn them out.”

Regulars at the Kingdom Street and Waymouth Street venues will see familiar faces at A Prayer for the Wild at Heart, including Gennie Chee, who is now chief executive of all three companies.

A Prayer for the Wild at Heart will open in early December.