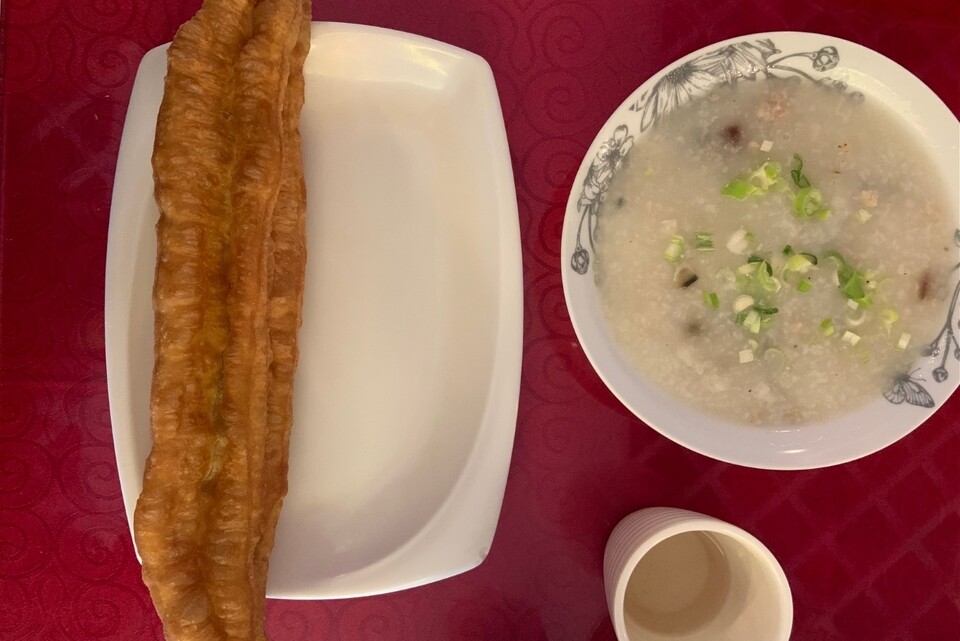 Shi Wang Yun’s humble red and beige facade fits effortlessly among the many Chinese restaurants on Parnell Street. It has three windows and a main door, and the sign is written in English and Chinese.

Inside are eight tables with red tablecloths, three of which are on a slightly raised floor. The place is small, but still airy.

“Our restaurant only has a few tables,” explains Yang Jie, who has owned the place for two years. “We are small.”

On each table there is a breakfast menu written in Chinese. There is no English version.

“That’s because only Chinese and Asian people eat this kind of breakfast,” Jie says.

A bowl of congee, swimming with chunks of pork, a fermented egg and green onions, is priced at €3. Accompanied by a strip of fried dough, almost churro, listed on the menu at €1, it is a hearty breakfast.

“People don’t want to spend too much on breakfast,” says Jie. “And we want people to try traditional Chinese breakfast. We always give good portions and want to keep it affordable.

Alice Chau, a cat behaviorist who also runs Chinese food tours in Dublin as a hobby, so she can share her passion for Chinese food with an Irish audience, took notice of the restaurant as she lives nearby and passes by often.

“Recently I found out they open in the morning and noticed a breakfast menu on their storefront,” she says.

“The restaurant has no website, no landline, is hard to find and has no English on its breakfast menu. I think a lot of people love hunting! she says.

For breakfast, the customers are mostly Chinese and other Asians for breakfast, says Jie. Other locals and tourists flock from the afternoon, when an English menu is handed out for lunch and dinner.

The restaurant has been around for over five years. Jie bought it a few years ago.

“I think we’re on track to achieve our goals, but we still have a lot of changes to make to improve our business,” she says.

“We want people from different countries to experience something different, especially breakfast. Some people are curious about traditional Chinese breakfast,” she says. “Most Chinese restaurants on Parnell Street don’t serve it.”

Chau says he noticed a morning clientele. “I notice that during the week there are a lot of types of work in there. I could see that they had breakfast quickly and then went to work.

Chinese rolls are like large doughy dumplings with a salty filling; the seaweed and turnips have been julienned and have a hint of spice.

Each of these two Chinese breakfast options on Parnell Street are cheaper than a full Irish breakfast, which easily costs over €8 at most establishments.

“I was surprised by the price list; it is very affordable. The first time I had breakfast there it was less than €5. In fact, it was €3.40, and I had 3 items! Chau said.

“Cheap” has long been a stereotype associated with Chinese or “ethnic” food. A discerning diner would not dare to expect French cuisine for less than €5.

“Notions of cheapness and authenticity have intersected,” says Chin, the food writer.

“Chinese food is undervalued everywhere. It is perhaps more undervalued by the Chinese themselves,” she says. “There’s also this stuff of white people saying ‘ethnic food should be cheap’.”

“But in Dublin you can’t undervalue it too much because importing ingredients is much more expensive here than in the US,” she says.

Chin says that as a Chinese, she gives herself a certain value. “If a restaurant served sea bass in black bean sauce for, say, $35, that would make me appreciate my culture and myself more,” she says.

In his book The Ethnic RestorerKrishnendu Ray demonstrates how the reputation of Japanese cuisine has changed from “ethnic” to “foreign”, writes Scott Alves Barton, in a review of the book.

“Much of the rise and fall lies in public perception, which includes style and standards of service, dominant ingredients, and technique,” Barton writes.

This culinary hierarchy could be attributed to the fact that Japanese cuisine has become haute cuisine, with more Japanese restaurants receiving Michelin stars. Like Ichigo Ichie in Cork, who is known for fusing Japanese techniques with Irish products.

Chinese restaurants in Dublin vary in pricing. China Sichuan in Sandyford specializes in traditional Chinese cuisine, but has higher prices. Entrances to China Sichuan start at €8.25.

“You go to Ka Shing or Sichuan China and the margins are higher,” says Chin, the food writer. “Local meats, etc. are expensive. An affordable model should be funded by something else rather than the restaurant.

Shi Wang Yun is proud of his home cooking, says Jie. “We want to show people what real Chinese food is and give them an experience like they would have in China, and not much has changed, and make them feel like they’re at home.”

Passing of the torch and snail | News